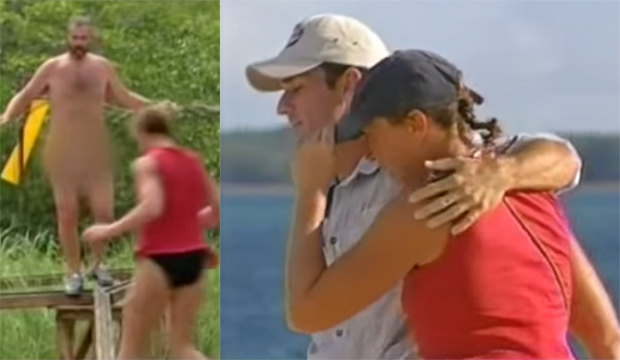 This week on “Survivor,” a contestant (Dan Spilo) was removed from the game for the first time ever due to an off-camera “incident” involving sexual misconduct. (See host Jeff Probst‘s response.) The shocking development reminds us of the last time something like this happened on CBS’s reality TV show. The year was 2004. The season, “All-Stars.” In the fifth episode, the players competed in an immunity challenge that required them to brush up against each other as they ran across a balance beam. A problem arose when Richard Hatch, who was voluntarily naked (as he often was on the island) flaunted his body against Sue Hawk. Watch the incident below.

At first Hawk seemed to laugh it off, but when she got back to camp she couldn’t get that moment out of her mind. “I just kept reliving the incident. It just kept eating into me more and more like a cancer,” she later said on “The Early Show.” One day after the incident, Hawk expressed her feelings openly at a reward challenge after Probst announced he wanted to address Hatch “sort of being inappropriate.”

“I was sexually violated,” Hawk stated flatly. “To have some guy come up, he passed a half a dozen people on platforms and never touched ’em. It went too far. He crossed the line with me.” Watch the “Survivor” flashback scene below, which is more timely than ever in the #MeToo era.

Probst tried to interject twice, but Hawk cut him off as she tried to tell her story. “I know you didn’t see it because his back was to you and he’s too big of a slob to see around. I was violated, humiliated, dehumanized and totally spent, Jeff.” Hawk then called out Probst for using the description “sort of,” as if taking the onus off of the inappropriate act.

“I’m spent and I’m done with this game,” Hawk said. “There’s no way I can continue with my emotions pushed to the ground that much.” When Probst asked whether Hatch being voted out in the previous episode mattered, she responded, “My head left this game 24 hours ago.”

SEE ‘Survivor,’ you’ve got some explaining to do about why Dan Spilo was kept in the game for so long [POLL]

Watching this incident now, it’s clear Probst did observe Hatch rubbing against Hawk while moving around her on the beam. He even said, “Guys, come on. No one cares about that stuff.” Well, it turns out Hawk sure did. Of note, “All-Stars” was the second time Hawk and Hatch had played together after appearing in the first-ever “Borneo” installment. Neither has appeared since.

A month ago, when Spilo’s allegations took center stage on “Survivor: Island of the Idols,” Hatch responded to a fan’s question on Twitter about whether he ever thinks differently about walking around naked in lieu of today’s cultural atmosphere. Hatch responded, “No, I don’t. I never learned about Sue’s concocted story until months later. She made it up after I was gone, & I maintain nudity is healthy and natural. Nobody on All-Stars could claim my (or others’) nudity was a surprise. We all signed up, literally & legally, to deal with it.”

No, I don’t. I never learned about Sue’s concocted story until months later. She made it up after I was gone, & I maintain nudity is healthy and natural. Nobody on All-Stars could claim my (or others’) nudity was a surprise. We all signed up, literally & legally, to deal with it.

Hatch’s declaration she “concocted” the story is similar to what he claimed on “The Early Show” in 2004 — that he and Hawk saw the incident “from two different perspectives” because he felt she was “taunting” him on the balance beam. He added, “It’s not about her apologizing to me or, from my perspective, about my apologizing to her. I’m so sorry that she feels this way. I’m so sorry that it’s been so emotional for her. I do feel for her very, very much.”

Initially Hawk received no comfort or concern from her tribe mates, including Rob Mariano, who is a mentor on the current season. When Probst inquired about whether anyone else had discussed the incident at their camps, Colby Donaldson divulged, “You know from the first season, living with a guy being naked sucks ’cause he’s naked all the time.” The real question is why, even on the first season, was Richard allowed to walk about in the buff?

SEE Jeff Probst: Dan Spilo was ‘not happy’ to be removed from ‘Survivor’ after off-camera ‘incident’

One female player on the other tribe, Shii Ann Huang, chimed in, “I’m so sorry, Sue. I’m so sorry. I didn’t see him. I’m so sorry.” Her three female tribe mates hugged her and said goodbye while Shii Ann cried. The men, however, could only stand around awkwardly as Probst led her to a boat. Jerri Manthey shook her head as if she knew how Hawk must feel while Kathy Vavrick-O’Brien stated, “Boy, is that discouraging.”

Probst let the remaining players decide whether they wanted to go ahead with the reward challenge or simply call it off and divvy up the food reward. Jenna Lewis suggested sharing the food and “fixing the animosity between the two tribes instead of playing.” Mariano and nearly everyone else just wanted to play and put the matter behind them. “We want some normalcy,” one says while someone else says, “Let’s have some fun,” with no further discussion on such subjects as boundaries or treating one another with respect.

Fifteen years later, at least Probst and his fellow producers are now enlightened enough to take steps to relieve some of the tensions by issuing a warning to Spilo in Season 39. But clearly it wasn’t enough to keep it from happening again.