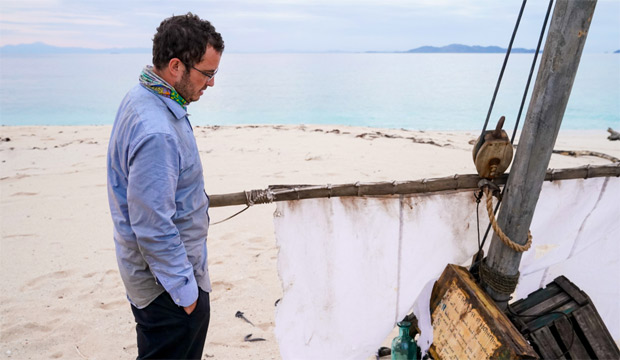 Rick Devens, or “dad bod” as Kelley Wentworth calls him, made an epic return to “Survivor” during the seventh episode when he beat out Reem Daly, Keith Sowell, Chris Underwood, Aubry Bracco and Wendy Diaz in the reality TV show’s first-ever “Edge of Extinction” challenge. Rick was visibly emotional when he was named the winner of the obstacle course challenge, having waited for this moment since he was voted out in the fourth episode. Are YOU happy that Rick returned, or were you rooting for someone else? Vote down in our poll below.

“Before Edge of Extinction, the game in a lot of ways was getting the best of me,” Rick declared after getting his second chance at the $1 million prize. “But if I can win my way back into the game, what the hell’s out here that’s gonna scare me? I can win these people over. I can win challenges. I’m a whole new man thanks to the Edge of Extinction.” Later after the merge feast, Rick shouted, “I’m back, baby!”

The Georgia newscaster was given a surprise advantage for re-entering game: an immunity idol divided into two different parts. The objective of this unique prize was to keep one half and give the other half to someone else as a way of “buying” their support for one tribal council. If both castaways survived tribal council, then the two halves would become one idol beginning at the next elimination.

Rick made the easy decision to give the other half of the idol to his buddy David Wright, as opposed to handing it to someone who was potentially thinking of voting him out. In the end it didn’t really matter, since the six-person Kama alliance of Victoria Baamonde, Julia Carter, Ron Clark, Eric Hafemann, Julie Rosenberg and Gavin Whitson had already chosen to target the island’s biggest physical threat: Joe Anglim.

Following Joe’s elimination, only 12 people remain in the game and the Kama six now have a distinct advantage unless and until the other six players — Dan “Wardog” DaSilva, Aurora McCreary, Lauren O’Connell, Kelley, David and Rick — realize what’s going on. If these outcasts find a way to come together in their own alliance, they could create a deadlocked vote resulting in drawing rocks. Otherwise, they’ll likely be picked off one by one.