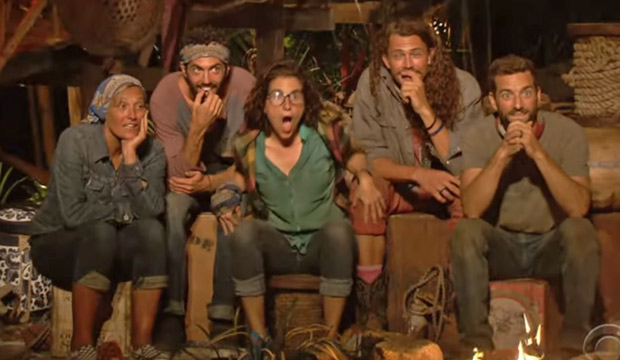 “One of the craziest tribals I have ever been a witness to,” proclaims “Survivor: Edge of Extinction” host Jeff Probst during the preview trailer for next Wednesday’s episode. In the spoiler-filled “Survivor” promo video (watch below), we see the jury of five reacting to what must be a major shockeroo, as Aubry Bracco gives a mouth-wide-open gobsmacked expression. Aubry then grabs the knees of Chris Underwood and Joe Anglim as if to hold herself steady, while Reem Daly and Eric Hafemann‘s eyes bug out of their heads.

We also hear snippets of shouting and pleading from the remaining 11 players still in the game — things like “I don’t have control!” “Who are the people doing this?” “Who voted with you guys?” “I’m ready to jump ship!” However, it’s tough to place some of the voices to the castaways, so we won’t even try.

After last week’s shocking blindside of Eric, in which his Kama alliance turned on him, Ron Clark and Julie Rosenberg appear to be at the bottom of the totem pole since they are now vastly outnumbered. Is Julie the one who’s ready to “jump ship”? And if so, are the outcasts willing to take her in as an extra number?

SEE Friendship in chaos: Is this the end of David and Rick on ‘Survivor: Edge of Extinction’? [POLL]

Of course, usually when Jeff says something to the effect of “craziest tribal ever” it’s because multiple advantages are used. Below, let’s take a look at who still has hidden advantages as we head into Episode 9 of Season 38, which is scheduled to air April 10 on CBS:

Ron Clark — 1 advantage menu that gives him the option to choose either a) a reward steal, b) an extra vote, c) individual immunity.