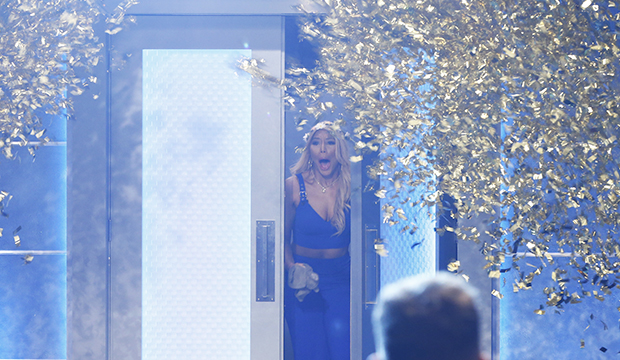 Tamar Braxton became the second winner of “Celebrity Big Brother” on Wednesday, beating Ricky Williams with a 9-0 sweep. And not to oversell it, but her win was a pretty big deal. Here are four ways Tay-Tay made herstory with her victory.

1. She is the franchise’s first black winner
Yup. Not female black winner, but first black winner. This is counting 20 seasons of regular “Big Brother,” one season of “Big Brother: Over the Top” and two seasons of “Celebrity Big Brother.” We were guaranteed the first black winner between Tamar and Ricky, but the odds favored this duck being broken as we got to the business end of the season. Dina Lohan was the only white woman of the final five that also included Kandi Burruss and Lolo Jones, whose father is African-American and mother is Caucasian. Of course, Tamar is not the first person of color to win the stateside version of the show, as Jun Song won Season 4.

2. She is the second person to win with a unanimous vote
As Julie Chen Moonves mentioned on the show, Dan Gheesling is the only other person to prevail with a unanimous vote, which he accomplished the first time he competed on Season 10. But numbers-wise, Tamar’s triumph is more impressive because she won over an entire jury of nine, while back then Dan blanked his fellow Renegade Memphis Garrett 7-0.

3. She is the second woman to beat a guy on “Celebrity Big Brother” and just the fifth overall
It’s the ladies’ time in the “Big Brother” franchise. Before Season 18, a woman had never beaten a man in the final two, but after Nicole Franzel took down Paul Abrahamian, the floodgates opened. Morgan Willett then defeated Jason Roy on “Big Brother: Over the Top,” which was voted by America, and last season on “CBB,” Marissa Jaret Winokur edged out Ross Mathews. Then on Season 20 last summer, our little peanut Kaycee Clark snatched the win from Tyler Crispen. So from the inaugural “CBB” installment to now, Tamar has made it three consecutive seasons of women crushing guys at the end.

4. She broke the “first to enter” curse
The two most legendary “Big Brother” curses are: 1) Otev champs never win the show and 2) the first person to enter the house never wins. Well, Tamar just broke the latter because she was the first houseguest to step inside the house this season, as Ryan Lochte, gentleman that he is, held the door open and let the rest of the initial group of six in first. Does this mean we’ll get an Otev winner who goes on to win the show next?