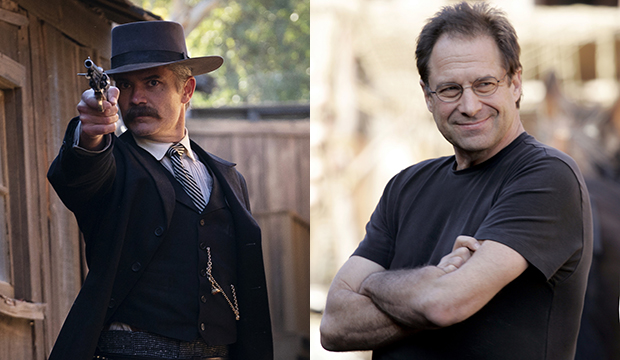 Break out the f-bombs because “Deadwood” is getting not one but two honors at the 35th Annual Television Critics Association Awards. The renowned Western will lasso up the Heritage Award and series creator David Milch will receive the Career Achievement prize at Saturday’s ceremony.

This marks the first time that the two awards will go to a show and its creator at the same ceremony. The Career Achievement Award has been given out at every TCA Awards, with former NBC Chairman Grant Tinker being the inaugural recipient in 1985, while the Heritage Award was established in 2002, honoring “The Simpsons.” Last year’s recipients were Rita Moreno and “Friends.”

The dual prizes for “Deadwood” come a little more than two months after “Deadwood: The Movie” premiered on HBO, reuniting most of the original cast, including Ian McShane and Timothy Olyphant, to give the groundbreaking series the sendoff it never got when it was abruptly canceled after three seasons in 2006 amid a financial dispute. The film is up for eight Emmys, including Best TV Movie. The series won eight Emmys during its original 2004-06 run.

“Nearly 13 years after it ended, HBO’s ‘Deadwood’ finally received the closing chapter it so richly deserved. It gave many of us the opportunity to revisit and reflect on this expertly realized piece of world-building, full of gloriously uncouth characters, indelible performances and magnificently profane dialogue that felt like dragging Shakespeare through a whiskey-soaked brothel. With its three seasons and ‘Deadwood: The Movie,’ this is one of the essential texts of our recent Golden Age and a worthy recipient of our Heritage Award,” TCA President Daniel Fienberg said in a statement.

“Of course, every discussion of ‘Deadwood’ must begin with the man who brought it to life, David Milch, whose incredible vision and commitment to authenticity helped give the series its heart and soul. It’s unprecedented for the TCA’s Heritage and Career Achievement Award to be presented in tandem like this, but it’s an appropriate appreciation of an illustrious career that started with an Emmy-winning ‘Hill Street Blues’ episode and, from ‘NYPD Blue’ to ‘Luck’ to ‘Deadwood,’ has left such a vivid, colorful and always distinctive legacy.”

A four-time Emmy winner, Milch, who revealed in April that he was diagnosed with Alzheimer’s a year ago, is no stranger to the TCA Awards: “NYPD Blue” won Outstanding Achievement in Drama in 1994 and “Hill Street Blues,” which he joined in 1982 with his Emmy-winning script “Trial by Fury,” earned the Career Achievement Award in 1987.

Both awards will be presented at Saturday’s ceremony, hosted by Desus & Mero. “Pose” and “Russian Doll” lead the nominations with four each.

2020 SAG Awards film report: Brad Pitt ('Once Upon a Time in Hollywood') wins supporting actor in a film…