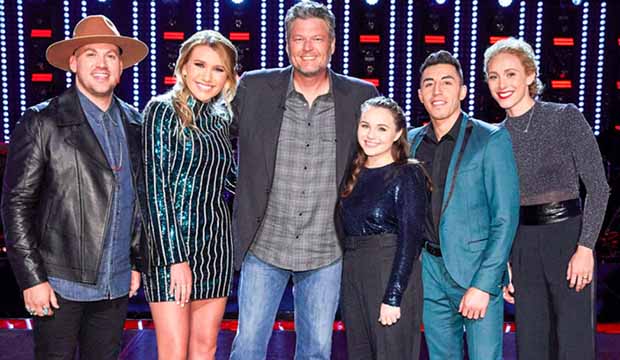 Now that we’ve seen all five of Blake Shelton‘s remaining artists perform live on “The Voice,” which one do YOU hope goes on to join the winners list for Season 17? “Team Blake is dominance,” the country superstar coach declared before adding his team is “the color red and orange, as in fire.” Ricky Duran, Cali Wilson, Gracee Shriver, Kat Hammock and Ricky Braddy all took the stage during the Monday, November 11 live Playoffs (read our live blog recap here), so vote in our poll below to tell us which one you’re rooting for to become the seventh champion from Team Blake.

Ricky Duran was up first in the live show with his cover of “Small Town.” “Every single time Ricky gets on that stage I know he’s gonna kill it,” Blake said. “He’s got a kind of a gravelly voice and he’s just a really aggressive singer, and I love that.” Ricky’s previous songs were “The Story” in the blind auditions, “Rumor” in the battles and “So High” in the knockouts.

Next up was Cali Wilson with “Toxic,” whom Blake referred to as someone who’s “just now starting to open up and become the artist that I know that she can be. She understands how to take ideas and do it in her own way and I think that’s gonna make her a threat.” Cali’s previous songs were “Dreams” in the blind auditions, “Miss Me More” in the battles and “Wicked Game” in the knockouts.

Gracee Shriver was Blake’s third artist to take the live stage, performing “American Honey.” “The fact that Gracee is on Team Blake now and we can start selecting songs to fit her unique tone and style, this is gonna be a deadly competition,” Blake promised. Gracee’s previous songs were “Rainbow” in the blind auditions, “Blue Ain’t Your Color” in the battles and “Leave the Pieces” in the knockouts, which is when Blake stole her from Team Kelly Clarkson.

Kat Hammock performed fourth during the Playoffs, opting for the song “God Only Knows.” “Kat could be the deadliest artist in this competition,” noted her proud coach “Her voice has got great pitch. It’s whispery, airy, but still has strength in it. I guarantee you: people are going to love her voice.” Kat’s previous songs were “Vienna” in the blind auditions, “Take Me Home, Country Roads” in the battles and “Kiss Me” in the knockouts.

Finally, Ricky Braddy closed things out for Team Blake with his rendition of “Roll With It.” Blake remarked, “Every time Ricky gets on that stage, he does something vocally that I didn’t even know he was capable of. You put that in a live competition, it’s really gonna get exciting.” Ricky’s previous songs were “River“ in the blind auditions, “Valerie” in the battles and “She Talks To Angels” in the knockouts.