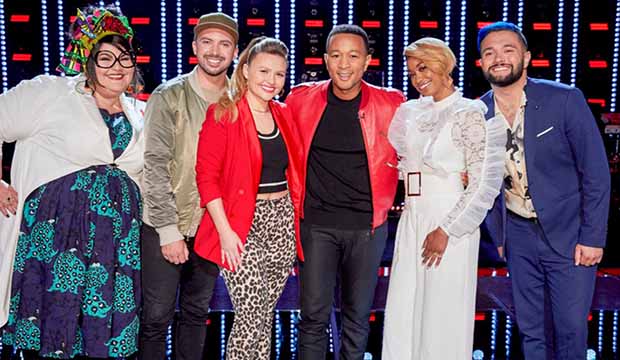 Now that we’ve seen all five of John Legend‘s remaining artists perform live on “The Voice,” which one do YOU hope goes on to join the winners list for Season 17? “I am so excited about Team Legend,” the soulful coach declared. “We’ve got soulful rock, pop and soul, R&B, we’ve got a really great combination.” Khalea Lynee, Alex Guthrie, Marybeth Byrd, Will Breman and Katie Kadan all took the stage during the Monday, November 11 live Playoffs (read our live blog recap here), so vote in our poll below to tell us which one you’re rooting for to become the second champion from Team John.

Khalea Lynee was up first for Team Legend in the live show with her cover of “Love Like This.” John stated, “Khalea is a full-time mom. She put music on the back burner for a while, but hearing her sing you’re like, whoa, what the world was missing out on. She has a honey tone, so much control. She is one of the singers to beat. ” Khalea’s previous songs were “Best Part” in the blind auditions, “The Boy Is Mine” in the battles and “Because You Loved Me” in the knockouts.

Next up was Alex Guthrie with his version of “If I Ain’t Got You.” “I stole Alex from Team Kelly,” John reminded the audience. “He’s such a talented singer. He’s soulful. I think he has that kind of voice that is pretty flexible.” Alex’s previous songs were “Love and Happiness” in the blind auditions, “Home” in the battles and “I’m Not the Only One” in the knockouts, which is when John stole him from Team Kelly Clarkson.

Marybeth Byrd was John’s third artist to take the live stage, performing “Love Me Like You Do.” “Marybeth is the youngest artist I have left,” he said about the 18-year-old. “She’s such a talented vocalist. She’s so poised and so in control. The core of it is pop but she can go more soulful, more country. I think we still haven’t seen the best of her. I’m gonna try to unlock that for the lives.” Marybeth’s previous songs were “Angel from Montgomery” in the blind auditions, “Burning House” in the battles and “All I Ask” in the knockouts.

Will Breman performed fourth during the Playoffs, going with the song “Style.” “Will is so electric,” John announced about the artist who opened up about his Asperger syndrome. “His energy on stage is contagious. We sang [‘Ordinary People’] together in the blinds.” Will’s previous songs were “Say You’ll Be There” in the blind auditions, “Treat You Better” in the battles and “I Don’t Care” in the knockouts.

Finally, Katie Kadan closed things out for Team Legend with her rendition of “Always Remember Us This Way.” “From the moment I heard Katie in the blinds I felt like she’s one of the best performers in this competition,” John stated about his four-chair turn artist. “She’s just so powerful and one of the most distinct performers that we have.” Katie’s previous songs were “Baby I Love You” in the blind auditions, “Tiny Dancer” in the battles and “Piece of My Heart” in the knockouts.