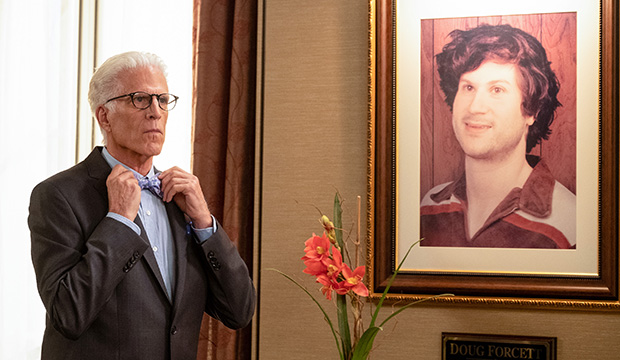 Ted Danson made Emmy history last year when he set a record for the most Best Comedy Actor nominations with his 12th bid in the category, for “The Good Place.” And now he can put even more distance between himself and the also-rans with his lucky 13th nomination.

Danson is in third place in our Best Comedy Actor odds, trailing defending champ Bill Hader (“Barry”) and Golden Globe champ Michael Douglas (“The Kominsky Method”). He’s ahead of Don Cheadle (“Black Monday”), Jim Carrey (“Kidding”) and Anthony Anderson (“Black-ish”). Danson’s nomination last year was a surprise, as he was in eighth place in our odds after the Emmys completely snubbed “The Good Place” the year prior, but his and Maya Rudolph‘s guest bid helped the beloved afterlife comedy break through in a major way. (“The Good Place” is currently in fifth place in our Best Comedy Series predictions.)

A two-time winner for “Cheers” in 1990 and ’93, Danson was in a three-way tie with 11-time Best Comedy Actor nominees Alan Alda and Kelsey Grammer for 14 years. Alda was the original record holder in the category, getting nominated for all 11 seasons of “M*A*S*H,” winning in 1974 and 1982. Danson then matched him with 11 nominations for 11 years of playing the same character, our favorite bartender Sam Malone, on “Cheers.”

“Frasier” also ran 11 seasons, but Grammer was only nominated for 10 of them, getting snubbed in 2003. His 11th Best Comedy Actor bid, however, was also for playing Dr. Frasier Crane — in an episode of “Wings” in 1992, the one year when the TV academy allowed guest stars to compete in the regular acting races. Grammer has the best win conversion rate of the trio, earning four statuettes, a record he shares with Carroll O’Connor (“All in the Family”), Michael J. Fox (“Family Ties,” “Spin City”) and Jim Parsons (“The Big Bang Theory”).

No one besides Danson, Alda and Grammer have cracked double digits in nominations in this category. Fox, O’Connor and Tony Shalhoub (“Monk”) are next with eight nominations apiece.

If Danson makes it in and wins, he’d join Dick Van Dyke (“The Dick Van Dyke Show”), Don Adams (“Get Smart”), John Lithgow (“3rd Rock From the Sun”) and Tony Shalhoub (“Monk”) as three-time winners in the category.