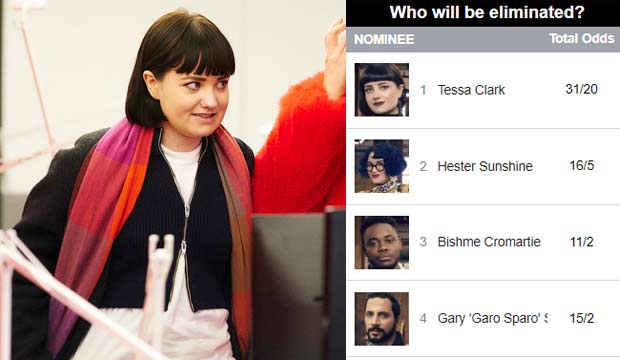 Tessa Clark was a rock star on “Project Runway” at the start of the season, winning the very first challenge in the premiere episode. But it has been a rough few weeks for the minimalist designer, and it actually started when she had to design for a rock star in “The Stitch is Back.” Now with only five designers left in the competition it’s not looking too good for her. We think she’s about to be eliminated.

As of this writing Clark gets leading odds of 31/20 of being sent home. Those odds are calculated from the combined predictions of “Runway” fans we’ve polled every week here in our predictions center, and the vast majority of them say Clark’s days are numbered. It was smooth sailing for her through the first eight challenges, but the judges thought she played it too safe with her Elton John performance outfit in “Stitch is Back.”

It got even worse for Clark in the most recent episode, “New York City of Dreams,” where she ignored her client’s wishes for her dream dress and delivered another safe black design, and the judges are also starting to tire of her unfinished hems. She finished in the bottom two, but was spared elimination; the judges decided to send home Jamall Osterholm instead. They probably took into account Clark’s stronger track record overall as well as Osterholm’s youth and inexperience.

But there’s no one to hide behind now. Out of the five remaining designers she has the poorest track record, with one win and just two other high scores. That’s not bad, but it’s shy of Hester Sunshine‘s three wins, Sebastian Grey and Bishme Cromartie‘s two wins apiece, and Garo Sparo‘s one win and five total high scores. And since she’s coming off her worst challenge yet, the judges may be especially unforgiving. But we’ve seen designers rebound from a bad week many times. It only takes one good design to keep her alive and carry her into the final four.

Click on the elimination prediction graphs below for more detailed forecasts for tonight’s show. 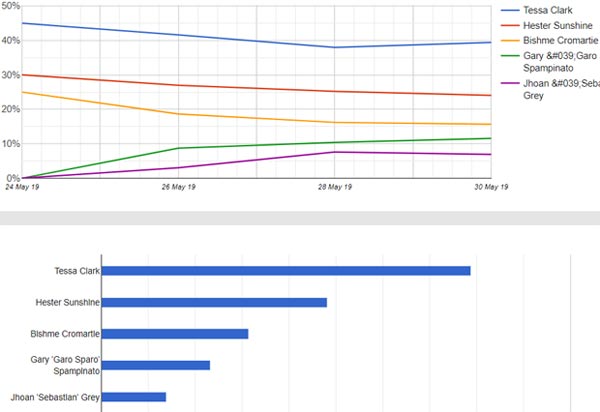