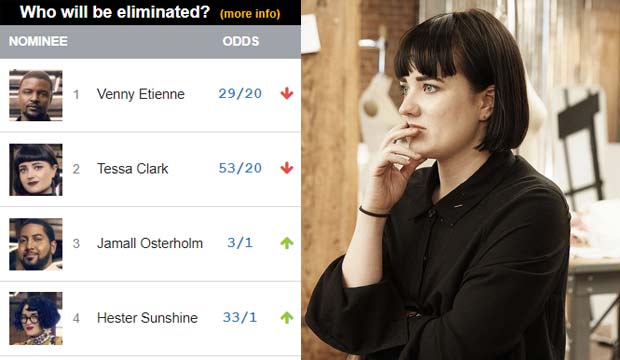 Venny Etienne is the only “Project Runway” designer remaining who hasn’t won a single design challenge, and he’s been in the bottom two for the last two weeks in a row. So it’s not too surprising that he’s the likeliest to be eliminated according to the combined predictions of fans we’ve polled here in our predictions center. But is it possible Tessa Clark could go home instead in a surprise elimination? Some fans think she’s at risk too.

Etienne has been all over the map in terms of his results: three high scores, three low scores and three safe scores over the course of the first nine challenges. After his poor showings in the recent “Blame it on Rio” and “The Stitch is Back,” he gets leading odds of 29/20 of being sent home in seventh place. I doubt the judges will keep him around if he lands in the bottom three yet again, especially after they eliminated the promising Renee Hill and Lela Orr to keep him around.

But Clark might also be showing signs of weakness. Her “Stitch is Back” look struck the judges as too conservative and safe, and this season we’ve seen that the judges would prefer you to take a big swing and miss rather than to deliver a design that’s just middle-of-the-road. Clark is a self-proclaimed minimalist, but the line between simple and boring might be thin.

“Stitch” was Clark’s first low score all season, but it was concerning enough to the judges that it inspired discussion of her other possible shortcomings. Brandon Maxwell has noticed, for instance, Clark’s tendency to make garments with unfinished hems. Clark has always defended that as a deliberate design choice, but after so many weeks of that, the judges might start to write off her looks as unpolished and unfinished. So our readers rank her second in their elimination predictions with 53/20 odds.

SEE‘Project Runway’ designer Sebastian Grey has yet to land in the bottom 3: How long will he stay bulletproof?

Do you think Etienne will survive another week? Can Clark make a comeback after her rare misstep? Or will someone else go home in tonight’s show? Click on our elimination predictions graphs below to see more detailed forecasts for tonight’s episode. 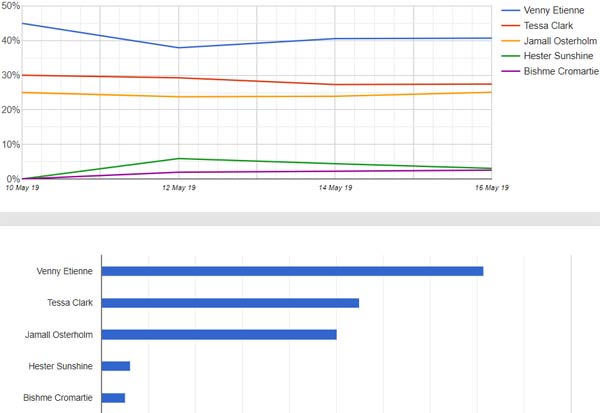