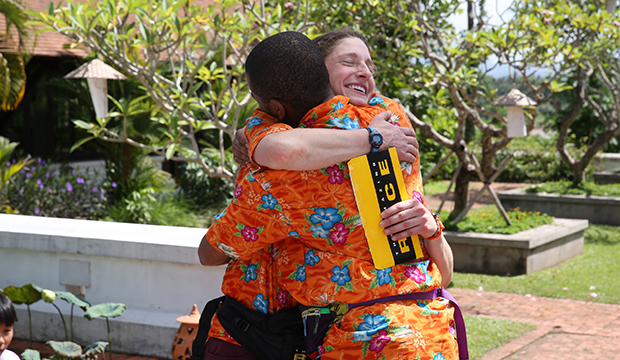 This will chart high on the Fun-O-Meter. In a recent poll, 28 percent of our readers believe that Team Fun, Becca Droz and Floyd Pierce, have been the most impressive team on “The Amazing Race 31” so far, which is already a quarter-way done.

Now it could just be recency bias here since Team Fun came out on top last week, crushing both performance-based tasks, dancing and karaoke-ing, which seemed made for them. Their average placement would probably be higher if they hadn’t been U-Turned on the second leg, making them hit the mat in ninth place, following their fifth-place finish in Leg 1. But to go from last to first is nothing to sneeze at.

In second with 24 percent of the vote are Nicole Franzel and Victor Arroyo. The “Big Brother” couple has done the best out of the “Survivor” and “Big Brother” racers, nabbing back-to-back second place finishes to go with sixth place on Leg 1. They could’ve gotten first place on Leg 2 had Nicole not fallen for the Afghanimals’ lie that she was going in the wrong direction, allowing them to pass her and Victor.

SEE Ouch! Watch Colin literally get nailed in the head in this ‘Amazing Race’ deleted scene

Colin Guinn and Christie Woods are in third with 18 percent. They actually have the best average placement so far, with second, fourth and third place finishes, but the new and improved Colin and Christie aren’t raising hell like they did in Season 5 — he doesn’t even flinch when he gets nicked in the head by a nail now! — so their low-key vibe might make people, on the show and off, overlook them, which could also work in their favor.

The Afghanimals, Leo Temory and Jamal Zadran, are next with 13 percent. The cousins were riding sky high with wins on the first two legs, but they imploded on Leg 3 and just made the cut in eighth place. Their racing strategy of performative lying to throw people off could also come back to bite them in the ass down the line.

No other team hit double digits. Tyler Oakley and Korey Kuhl got 7 percent, followed by Janelle Pierzina and Britney Haynes (4 percent); a tie at 3 percent between Corinne Kaplan and Eliza Orlins, and Rachel Reilly and Elissa Slater; and a big fat zero percent for Chris Hammons and Bret LaBelle. The “Survivor” dudes have been performing worse each leg, going from seventh to eight and now ninth, and they lucked out with a non-elimination on Leg 3.