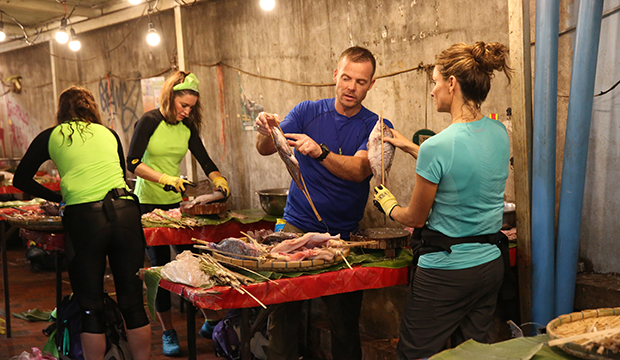 We’re three legs into “The Amazing Race 31,” which has already dismissed a “Race” team and a “Survivor” team, and has given us the first non-elimination leg of the season. A quarter of the season is now over, so who has been the best racers so far?

At first blush, it might feel like the Afghanimals, Leo Temory and Jamal Zadran, since they won the first two legs. But then they ran a terrible third leg in Vietnam and barely scraped by in eighth place. They’ve also managed to fool everyone with their fake fights and wrong directions, so either everybody this season is gullible as hell or the Afghanimals deserve an Emmy.

The Afghanimals’ three-peat was thwarted by Becca Droz and Floyd Pierce. Team Fun ran a stellar leg in Vietnam, granted they were helped tremendously by the performing tasks that were right up their alley. Still, after surviving a U-Turn in Leg 2, it’s pretty sweet to vault into first on the next leg.

Nicole Franzel and Victor Arroyo have performed the best out of the “Survivor” and “Big Brother” teams, posting a sixth place finish and back-to-back second places. First place was theirs for the taking on Leg 2 before Nicole fell for the Afghanimals tricking her into thinking she was going the wrong way (also ironic since “Big Brother” is all about lying and deception). They’ve adjusted the best out of the newbies, and props to Victor for acing that karaoke challenge in Vietnam after Eliza Orlins tried to throw him off in the practice room.

The calm and serene Colin Guinn and Christie Woods are still a sight to behold. They have the best average placement so far, after second, fourth and third place finishes. On Season 5, from Leg 3 onward, they never finished lower than fourth place, nabbing the top spot six times. Will they start dominating once again?

Tyler Oakley and Korey Kuhl were another team that dominated on their original season, coming in the top three 10 out of 12 times on Season 28. They haven’t gotten off to the same hot start this time, but they also improved their placement after getting U-Turned, claiming fourth place this week.

SEE Ouch! Watch Colin literally get nailed in the head in this ‘Amazing Race’ deleted scene

Both all-female “Big Brother” teams — Janelle Pierzina and Britney Haynes, and Rachel Reilly and Elissa Slater — have been getting by in more or less the middle of the pack thus far. The Reilly sisters do have a fourth and third place finish before they came in seventh in Vietnam after struggling at the dance Detour, but Janelle and Britney have definitely benefited from some teams being worse than they are.

For the first two legs, that included Corinne Kaplan and Eliza, who get easily flustered and default to panic mode when things start to go awry. But the prawns liked their bait in Vietnam and they improved to fifth place, their best finish yet. These two straight-up don’t care if you like them or not or who they piss off on the race, which is also refreshing, though maybe not the best tactic if they need help getting out of a sticky situation one day.

While Corinne and Eliza are adjusting to “Race” dynamics and requirements, their “Survivor” brethren Chris Hammons and Bret LaBelle are still on the lower end of the learning curve. In fact, they’ve been finishing worse every week, going from seventh to eight and now ninth. Luckily, Leg 3 was a non-elimination, but they’ll have to kick it into high gear and maybe get some lucky breaks next week to survive that Speed Bump.