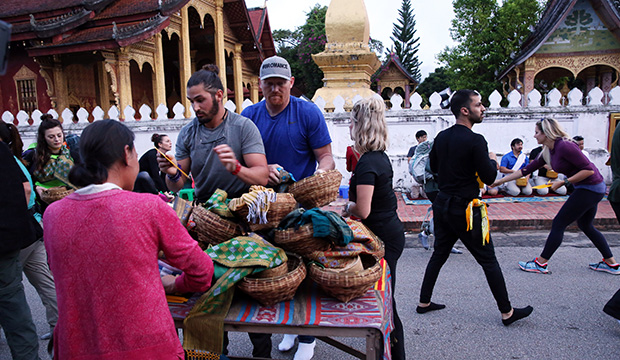 Leg 2 means double the fun and a Double U-Turn! Yup, we are getting a Double U-Turn already on “The Amazing Race 31.” Wednesday’s episode takes the remaining 10 teams to Laos for the show’s inaugural visit there, where two teams might have to complete both Detours: learning the Laotian alphabet or cooking a dish. Will both U-Turns be used? Probably, since this is a season with established boundaries, if not relationships, between former racers, “Survivor” and “Big Brother” alums.

Meanwhile, Rupert and Laura Boneham got a huge break last week when Art Velez and JJ Carrell took a four-hour penalty, allowing them to complete the final task and advance by the skin of their teeth. Will they struggle again? At least other racers seem excited to see them, unlike Corinne Kaplan and Eliza Orlins literally blocking the Afghanimals’ path because they weren’t “fun or helpful.”

Below, check out our minute-by-minute blog of the April 24 episode.

9:00 p.m. – As the winners of the last leg of the race, the Afghanimals (Leo and Jamal) will be the first team to head from Tokyo to Laos. As they hail their taxi, the other teams are sent after them one at a time. It’s time to race!

9:07 p.m. – Rachel and Elissa think they’ve formed an alliance with Team Fun (Becca and Colin), but soon learn all bets are off when the duo ditches the sisters when racing to purchase their plane tickets. Looks like that friendship didn’t last long! Meanwhile, the “Survivor” teams are bonding and hoping to help each other get to the end after Rupert and Laura were nearly eliminated last week.

9:15 p.m. – Teams are heading to their first challenge and while some teams opt to hop in a taxi, others decide to race on foot. Eliza and Corinne rub the Afghanimals the wrong way when they try  to impede their tut-tut by running in front of it. After spending the night near their first clue, the teams are racing towards the river to find their next clue. Elissa and Rachel are the first to arrive and there’s a double U-Turn! Colin/Christie and Victor/Nicole arrive next and the three teams are arguing about whether or not to use the U-Turn while other teams approach!

9:25 p.m. – Rachel and Elissa take revenge on Team Fun and decide to U-Turn the duo. They aren’t that big of a threat at this point of the race so that doesn’t seem like a logical choice. Now teams have to choose between one of two Detours; learning the Laotian alphabet or cooking some barbecue. Becca and Floyd are upset to see they’ve been in U-Turned, and hoping to save themselves, they U-Turn Tyler and Korey (as advised by the Afghanimals). All the teams except Tyler and Korey are heading to prepare some duck and tilapia dishes. Afghananimals and Team Fun are working together so it looks like an alliance has been formed there. Corinne and Eliza have chosen the Laotian alphabet challenge and hope to gain some ground on the others who chose cooking. Rachel wants to talk to Team Fun and apologize for U-Turning them, but Becca doesn’t seem interested in speaking. She called them “evil” lol.

9:35 p.m. – Rachel and Elissa finish the Detour in sixth place followed by Rupert/Laura in seventh. It looks like “Survivor” could be making a comeback! Meanwhile, Team Fun finished both challenges to escape disaster in eighth place. They pass up a couple other teams in their tut-tut and are feeling good about their chances after completing two challenges with multiple teams still behind them.

9:40 p.m. – Tyler and Korey finish their second challenge in last place, but they’re still in the race! Heading to the Road Block, Corinne and Eliza take a wrong turn and are passed up by their nemesis – the Afghanimals – and lose their spot at the head of the pack. Leo and Jamal were first to arrive and now one of them must convince a three-ton elephant to cross a river, using only Lao commands, and then find a musician in the forest. Jamal is taking the task and he’s a linguist so he’s picking up the commands quickly and heads out on the course! Nicole trails behind him and Victor is in tears knowing his fiance is so excited to ride an elephant. The next teams to arrive were Corinne/Eliza and Britney/Janelle. Up next: Colin/Christie and Rachel/Elissa. Britney can’t believe she’s about to bareback this elephant and was expecting a saddle. Back at the back of the pack, Korey and Tyler pass by Rupert and Laura in their tut-tut and the “Survivor” legend is once again in last place.

9:45 p.m. – Jamal and Nicole each get their clues at the same time and must now find their partners before they can open it. Overall, each of the teams look thrilled just to have this amazing experience with elephants in Laos. It looks pretty incredible! Nicole’s elephant is a bit quicker than Jamal’s and her and Victor are in first place by a hair! They’re heading to the next Pit Stop. The last team to check in MAY be eliminated. We’re about to have a taxi race!

9:50 p.m. – Becca’s  elephant is not interested in swimming today and she’s struggling to move forward for Team Fun. Rupert also appears to be in rough shape so it appears one of those two teams may lose this leg. Rupert is begging, pleading and kissing his elephant, doing whatever he can to proceed. He loves elephants and would hate to lose the race because of one.

9:59 p.m. – There’s a foot race followed by a boat race to the finish line and the Afghanimals once again regain the lead. Can they win their second leg in a row? The boat hits the beach and Nicole is devastated to learn she will have to race up steps in order to win. She can’t keep up with the Afghanimals so Leo and Jamal have one this leg! They each win $2,500. The Afghanimals had told Victor and Nicole they were going the wrong way and Nicole believed them, which ended up blowing this leg of the race for them. I love that the Afghanimals will stop at nothing. This is for $1 million! Lesson learned for Victor and Nicole. Meanwhile, Rupert and Becca are still struggling with their elephants and Rupert actually finishes first. Becca and Floyd are able to pull in front of the “Survivor” duo and Rupert and Laura were the last to arrive at the Pit Stop. Unfortunately, they’ve been eliminated from the race.