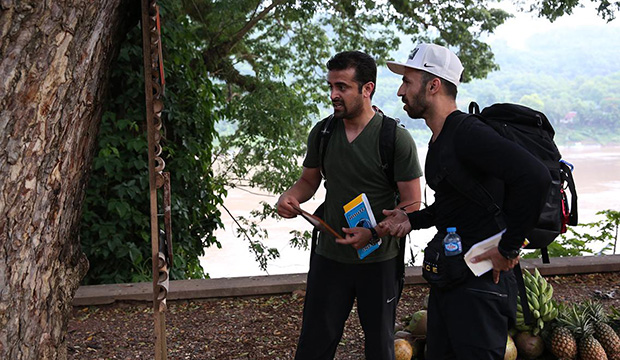 When you have “Big Brother” teams on “The Amazing Race,” you can expect the unexpected. And so we are getting a Double U-Turn on next Wednesday’s episode — yes, on the second leg! That’s the first time there’s been one on the second leg on the U.S. version.

Leg 2 takes the remaining 10 teams to Laos for the show’s first trip there ever. “Racers have a big decision to make when they face a surprise Double U-Turn in Laos,” teases CBS. A new photo (above) shows the Afghanimals, Leo Temory and Jamal Zadran, at what we surmise is the U-Turn board. It looks like the top section is already filled out with a team’s photo — maybe the Afghanimals’, which would also explain why it looks like they are about to U-Turn someone, since Jamal is holding what is probably a team’s photo in his hand.

This is the second earliest a Double U-Turn has been unleashed on “Race” after Season 26, which had one the first leg. It completely makes sense that producers want to stir the pot early with racers, “Survivor” and “Big Brother” stars in the game. On a regular season, most teams don’t use a U-Turn unless they really have to and/or they hate someone, as to not ruffle feathers.

But after a tough first leg for the non-racers, who repeatedly acknowledged that “Race” is a lot harder than they had thought, the “Survivor” and “Big Brother” teams might be inclined to use it this early. They know they need any advantage they can get over the returning racers, and if they use it, they wouldn’t become a pariah because they’d have their “Survivor” or “Big Brother” brethren supporting them. It’s kind of a win-win.

This early Double U-Turn is on top of the upcoming new U-Turn Vote, so TPTB are definitely living for the drama on this reality showdown.