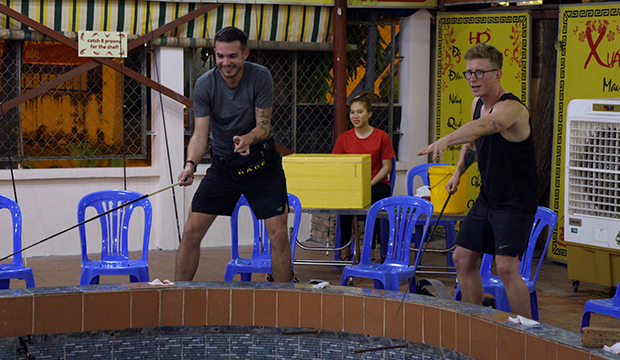 Both U-Turned teams — Becca Droz and Floyd Pierce, and Tyler Oakley and Korey Kuhl — survived the Double U-Turn last week on “The Amazing Race,” but one “Survivor” team did not, Rupert and Laura Boneham. Now the remaining nine teams are off to Vietnam for Leg 3 on Wednesday’s episode.

The leg appears to be a night leg, which is always fun. And this one relies on two Ps: performance and, uh, prawns. The Roadblock is a karaoke task, where Eliza Orlins does her best to troll Victor Arroyo, possibly because her public enemy No. 1, the Afghanimals, are nowhere in sight. The Detour options are to perform a synchronized dance or to fish for prawns. They both sound pretty easy, but the dance judge is not messing around here, and the fishing seems to be a waiting game.

The Afghanimals are going for their third straight win in a row after nipping Victor and Nicole Franzel last week by lying to Nicole that she was going the wrong way. With a “Race” and a “Survivor” duo gone, we are now down to four “Race,” three “Big Brother” and two “Survivor” teams. Who will live to race another day?

Below, check out our minute-by-minute blog of the May 1 episode.

9:00 p.m. – As the winners of the first leg of the race, Leo and Jamal aka the Afghanimals are the first to open the clue that the contestants are heading to Vietnam! All of the teams catch a flight and when they land they will need to pick up a bag of herbal remedies from a doctor at the House of Vietnamese Medicine. Time to race!

9:10 p.m. – Becca and Floyd (Team Fun) try to make a peace offering to Tyler and Korey and apologize for U-Turning them during the last leg. I’m not sure they accepted the olive branch, but we’ll see. Meanwhile, Rachel and Elissa also apologize to Team Fun, but they’re not interested. They’re out for revenge, but are wearing a smile on their face. To insulate their safety, a “Big Brother” alliance was formed between Rachel/Elissa, Victor/Nicole and Britney/Janelle. Who are the Afghanimals teaming up with? Nobody! They trust no one and with a target on their backs, they shouldn’t.

9:15 p.m. – The teams touch down in Vietnam and things get discombobulated as they all scramble for taxis. Eventually they’re all in route to the medicine house and Colin/Christie are the first to arrive. It’s a Detour: “Reel it In” or “Light it Up.” Players can choose to catch eight slippery prawns or learn a dance routine from one of Vietnam’s top dance crews. The majority of teams choose the dancing challenge. Meanwhile, the Afghanimals are up to their old tricks when they tell Corinne/Eliza wrong directions to the medicine house.

9:20 p.m. – At this point Tyler and Korey are the only duo fishing for prawns. Meanwhile, Floyd and Becca are the first to attempt their dance routine but need a bit more energy. Struggling in the back of the pack are both “Survivor” teams of Corinne/Eliza and Chris/Bret, but the Afghanimals and Britney/Janelle are struggling to find the Detour as well.

9:25 p.m. – Tyler and Korey have been fishing for what seems like an eternity and they’ve only caught one of eight prawns. They’re seriously considering changing detours, but stick with it for now. Meanwhile, Becca and Floyd are the first to complete the Detour when they successfully perform their dance routine. Next up the Road Block: “Tune Out.” They need to learn a few lines of a Vietnamese song and get a stamp of approval from a respected karaoke singer.

9:30 p.m. – Rachel is annoyed with Elissa because apparently she’s a terrible performer. While Tyler and Korey are fishing at a slow pace, they’re the only team fishing and have no clue where any other teams are. I’m sure the not knowing is most stressful, but eventually Corinne/Eliza show up and begin fishing as well.

9:35 p.m. – Blood has been drawn while Corinne/Eliza are messing around with their prawns, lol. They figure Chris and Bret must be lost because “they would never choose to learn a Vietnamese dance.” Wrong! Over at the dance party Colin/Christie and Victor/Nicole both complete the challenge and head to the Road Block.

9:37 p.m. – Team Fun arrived first at the Road Block and Floyd has decided to take on the challenge. Back at the dance challenge, Rachel has reached the peak of frustration because they have failed time and time again. Elissa is trying to talk her off the ledge, but Rachel blames Elissa for their bad performance.

9:45 p.m. – Corinne/Eliza pass by Korey and Tyler over at prawn fishing and they’re feeling demoralized until Bret/Chris arrive after giving up on dancing. Meanwhile, Floyd nailed his karaoke performance and Team Fun is KILLING this leg of the race. They’re already off to the Pit Stop, Ho Thi Ky, in the middle of a bustling market.

9:50 p.m. – Tyler and Korey finally finished catching eight prawns and Chris/Bret are kicking themselves for not going fishing first. Meanwhile, Rachel and Elissa finally completed their dance routine as well, followed by Janelle/Britney. The Afghanimals continue to struggle. Once Chris/Bret finish fishing, the Afghanimals seem to have gone from first place to last!

9:55 p.m. – Becca and Floyd are the first team to reach the Pit Stop! They’ve won a trip for two to the Bahamas. The rest of the teams are all struggling their way through karaoke with some (Victor and Eliza) more talented than others. The Afghanimals are last to arrive, but the other teams are terrified they’ll make quick work of this challenge.

9:59 p.m. – Without even practicing, Leo heads to the stage and is promptly boo’d off. He didn’t think he’d have to practice karaoke, but he was wrong. Meanwhile, the “Big Brother” girls nail it and Rachel/Elissa and Britney/Janelle are off to the pit stop! It’s going to come down to Chris/Bret vs. Leo/Jamal. The Afghanimals prevail in the end and Chris/Bret are the last to arrive. But it’s a non-elimination leg! The “Survivor” duo survive to race another day. They’ll have to complete a Speed Bump in the next leg of the race. That’s a wrap!