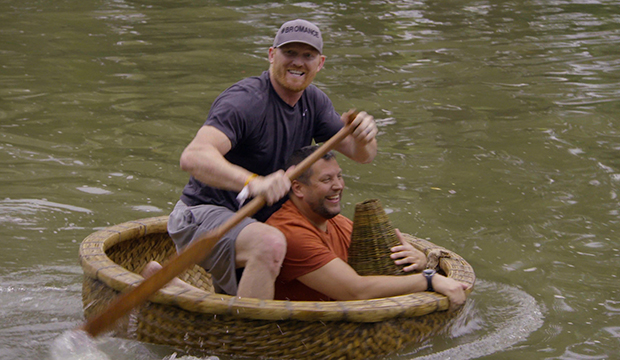 After our first non-elimination leg of the season last week, one team will definitely be ousted on Wednesday’s episode of “The Amazing Race.” Will it be lucky losers Chris Hammons and Bret LaBelle, who were saved by the NEL, or another duo?

The remaining nine teams are staying put in Ho Chi Minh City for Leg 4. Chris and Bret have to complete that pesky Speed Bump on top of the regular tasks if they want to survive this week. The “Survivor” alums haven’t really adjusted to the freneticism of “Race,” so on paper it doesn’t sound good for them, but anything can happen on a new leg.

The Detour options are to row a basket boat to collect an item or to build a water basket. Get all of your “up sh– creek without a paddle” jokes out now. The Roadblock is to complete a training course on a scooter, and judging by the preview, some of these guys need training wheels.

SEE This week’s ‘Amazing Race’ Roadblock spins racers right round, baby and out of bounds [WATCH]

And let’s not forget the piece de resistance of the episode that CBS can’t stop hyping: the taxi duel between Corinne Kaplan and Eliza Orlins, and Rachel Reilly and Elissa Slater. It’s so bad that the “Survivor” ladies “really hate” the Reilly sisters. Hail have no fury like Corinne and Eliza scorned (#sorrynotsorry).

Below, check out our minute-by-minute blog of the May 8 episode.

9:00 p.m. – Becca and Floyd, aka Team Fun, were the winners of the last leg and are the first to depart for their next destination: Saigon. They’re heading to an area called Snow Town to partake in their next challenge with the other teams close behind. Let’s race!

9:05 p.m. – Corinne and Eliza are humiliated that “Survivor” teams aren’t better than “Big Brother” teams on this race. Will they finally be able to take one of their rivals out? When the teams reach Snow Town, they’re forced to spend the night, so we kick off the competition in the morning with everyone on even footing. Each team sleds down a snow hill to snag their next clue.

9:15 p.m. – Team Fun maintains their lead and races off to the College Transportation Center to find their next clue. Meanwhile, Chris and Bret have hit their speed bump and will have to fill a cooler full of snowballs and transport them to College Transportation Center. That doesn’t seem so hard! A rivalry is in full swing as Corinne and Eliza get into a battle for a taxi with Rachel and Elissa. Both duos are snarky and petty, wasting too much energy on each other. Perhaps it’s karma, but Corinne and Eliza’s cab driver got lost and their complaining hits a new high. Teams finally arrive at College Transportation Center and Leo and Jamal aka The Afghanimals have taken over the lead. At the Road Block, teams will have to master the skills to earn a scooter license by completing a training course.

9:20 p.m. – Jamal takes on the Road Block for the Afghanimals while Elissa hits the course in second place. Both seem to be struggling, but a handful of teams can’t even catch a cab to the destination. That might be the break Chris and Bret needed because they just finished their speed bump and are back in the race after snagging a taxi before other teams. Meanwhile, Victor and Nicole have reached the Road Block now so three teams are now competing for first place.

9:25 p.m. – Jamal finishes the course and after a tough last leg, the Afghanimals are back in first place. They’re headed to Binh Quoi Village to find their next clue. On her seventh attempt, Elissa earns her scooter licence and her and Rachel are in second place. On just his third attempt, Victor launches himself into third place and we have a race! In the back of the pack Tyler and Korey as well as Janelle and Britney still can’t get a cab.

9:30 p.m. – The Afghanimals are the first to reach the Detour, where they must paddle a basket boat to collect fish OR build an irrigation wheel under the watchful eye of a local farmer. The Afghanimals decide to build the wheel while other teams try to chase them down. Rachel and Elissa arrive at the same challenge and seem to be studying the model more than the Afghanimals did so perhaps that will help them. Meanwhile, a slew of other teams finished the scooter challenge, but Corinne/Eliza and Tyler/Korey are still struggling.

9:35 p.m. – Colin/Christie and Victor/Nicole get to the Detour and have chosen to hit the paddle boats so we’ll see which challenge looks easier. Rachel/Elissa are reconsidering their choice to build the irrigation wheel, but think their experience building toys for their kids will be a benefit to them. Back on the scooter course, Tyler/Korey have finally advanced and Corinne/Eliza are officially in last place. Eliza is in tears. Corinne is hugging her and trying to talk her off the ledge, but Eliza is a mess.

9:40 p.m. – Despite successfully completing their irrigation wheel, it’s taking the Afghanimals forever to fill their water jug. Rachel/Elissa have nearly completed their wheel, but lost one of their ties so had to go back for another. That led for some teams in the basket boats to pass them up and Victor/Nicole are now in first place heading to the Pit Stop! They’ll be heading to Tam Vu Park to meet Phil with Colin/Christie hot on their trail. The Afghanimals finally complete their challenge, but Rachel/Elissa have some structural problems and Rachel begins to panic. Elissa tells her to remain calm, Corinne/Eliza aren’t even there yet.

9:45 p.m. – It’s a foot race to the finish line, but Nicole is apparently not in running shape. After respectable finishes in each leg so far, Colin and Christie have finally come in first place. They’ve won a trip for two to the Dominican Republic. It’s been 15 years since this duo last won a leg of “The Amazing Race.” Wow! Next, Victor and Nicole claim second once again. Back at the Detour, more and more teams finish the basket boat challenge and Rachel is freaking out!

9:50 p.m. – With most teams heading to the Pit Stop, Corinne/Eliza finally arrive at the Detour. They’re relieved Rachel/Elissa at the irrigation wheel so they decide to do the basket boat challenge and attempt to pass them. This rivalry has reached a head and perhaps Rachel was right – they should have switched challenges before Corinne/Eliza arrived.

9:59 p.m. – It’s Rachel/Elissa vs. Corinne/Eliza and both teams are struggling. Rachel/Elissa are trying to fill their jug with an irrigation wheel, a task Rachel compares to “watching paint dry.” They see that Corinne/Eliza are just finishing up as well and it will be a battle to the finish line. Rachel and Elissa get their first and Rachel is in tears saying, “We are so blessed.” Corinne and Eliza are just behind them and Corinne snidely remarks, “I guess we are not #blessed.” Corinne and Eliza have been eliminated from the race. More than anything, they were disgusted they lost to Rachel and Elissa and have no interest in speaking to them ever again. Corinne/Eliza then go sob on a bridge and talk about how much they hate Rachel/Elissa. That’s a wrap!