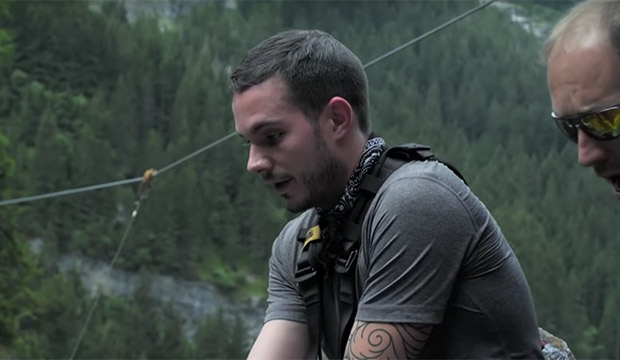 After making rolex in Uganda, the remaining seven teams on “The Amazing Race” are now off to Switzerland, aka home of Rolex! Did they plan it this way? Let’s hope so. Too bad Janelle Pierzina isn’t around to enjoy this.

The jaw-dropping moment of Wednesday’s episode will for sure be the Roadblock, which will have racers leaping 400 feet into the Gletscherschlucht Glacier Gorge. Between this and the zipline in Dubai, this season is not for the faint of heart.

But the drama of the hour — however much there actually is — will come courtesy of Rachel Reilly, of course. She’s very peeved about something Nicole Franzel and Victor Arroyo did, which may or may not involve the U-Turn Vote. Seeing as how the show has not even teased the new U-Turn Vote this week, you may want to lean on “not.”

Meanwhile, the “Race” teams will look to make it seven wins in a row. Every leg has been won by a “Race” duo so far, and there are only three teams left that could disrupt that: Rachel and Elissa Slater, Nicole and Victor, and Chris Hammons and Bret LaBelle.

Below, check out our minute-by-minute blog of the May 29 episode.

8:00 p.m. – As the winners of the last leg of the race, best friends Tyler and Korey are the first team to learn that they’re headed to to Zurich, Switzerland where the will catch a train to a glacier gorge to pick up their next clue. Becca and Floyd think Rachel and Elissa are targeting them and aren’t sure why, since there are plenty of other strong teams. They try to form an agreement to not target each other, along with the Afghanimals, but the Reilly sisters aren’t thrilled that their new pals want to target Victor and Nicole, who they have a “Big Brother” alliance with. They played along, but have no intention of U-Turning their “Big Brother” friends. Instead, they sisters tell Victor and Nicole about Becca and Floyd’s plan, hoping they will U-Turn the Team Fun duo instead. Let’s race!

8:15 p.m. – Once the teams touch down in Switzerland, they all manage to catch the same train. Nicole is concerned Team Fun is throwing their name around for a U-Turn, but her and Victor are skeptical of the Reilly sisters and think they’re lying. Suddenly an argument between the “Big Brother” teams breaks out and this alliance is over! Now all the teams seem to be ganging up on the Reilly sisters, which may seem like a simple plan, but it’s quite foolish considering they’ve finished near the back of the pack in every leg.

8:25 p.m. – Teams must run three kilometers to the Road Block and Tyler/Korey are clearly in the best condition. They pull away from the pack and learn what the challenge is: dropping 400 feet at 70 mph through a glacier gorge above a raging river. Once they’re on safe ground, they can seek out their next clue. This free fall looks intense! It’s pretty amazing. Korey finishes first and he and Tyler are heading to their next clue by helicopter. Back at the gorge jump, most teams are loving the challenge but Nicole is absolutely terrified. As she reaches the platform, she contemplates backing out and is warned she will have to go to the back of line. Currently, she’s ahead of only Elissa (Rachel) and Chris (Bret), so this is a huge decision. Finally she remembers a million dollars is on the line and takes the plunge!

8:35 p.m. – Tyler/Korey are the first team to reach the Detour. Here, teams have two choices. In “Water Power,” teams will ride the world’s steepest funicular, looking for the names of eight water bases and how much water they hold. They will then need to use their memory to match the names to a map once they finish. Can’t remember? Catch another ride! In “Water Down,” teams will descend 150 over a glacial river and grab their clue before continuing downstream. Water Down seems like the smart choice to me! Tyler/Korey are Watering Down, but their tall hunky tour guide, Sebastian, may distract them from completing their task in a timely manner. Meanwhile, Chris finally finishes the Road Block and he and Bret are in last place.

8:40 p.m. – Teams seemed to be gravitating to “Water Down,” but Leo/Jamal and Victor/Nicole opt for “Water Power.” The Afghanimals proved to have pretty awful memory in last week’s challenge, so I’m not sure what they are thinking. Nicole has simply had enough of heights for one day. The Afghanimals finish the ride pretty quickly, so if they actually remember the numbers this might pay off. And it does! They’ve launched themselves into first place with one attempt. They’ll head to the next Pit Stop at Michaelskirche, an ancient church. Now, all teams are on the “Water Down” challenge except Victor/Nicole. “Water Down” is the longer challenge, but definitely looks more fun!

8:50 p.m. – The Afghanimals had to wait 20 minutes for a ride back down the mountain and their lead is all but lost. It will be a tight race to the finish line because Tyler/Korey and Colin/Christie have also finished the Detour with other teams close behind. Victor/Nicole finish “Water Power” on their first try, which was a huge feat. Meanwhile, Tyler/Korey have won their second leg in a row! They’ll receive a rejuvenating spa day. Back at the Detour, Chris/Bret are on the heels of Rachel/Elissa and both teams fear elimination. Both teams hop in their cars and have no clue where they’re going.

8:59 p.m. – Rachel/Elissa and Chris/Bret both stop for directions and learn they’re headed the wrong way. They turn around and are racing for last place, or so they think! Victor/Nicole are also lost and could be in trouble as well. At the Pit Stop, it’s an “Amazing Race” sweep as all four teams have now finished. Finally, Elissa/Bret and Chris/Bret trickle in and Victor/Nicole will be last. Wow! Rachel has tied an “Amazing Race” for most legs run by an “Amazing Race” competitor, with 31. If she completes the next leg, she will have the record to herself. Finally, Nicole and Victor hit the Pit Stop and another war of words ensues with the Reilly sisters. Nicole is in tears and Victor is just pissed. Phil is pleased to tell Victor/Nicole it’s a non-elimination leg and the Reilly sisters don’t look happy about it. Ha! I think this is war. That’s a wrap!