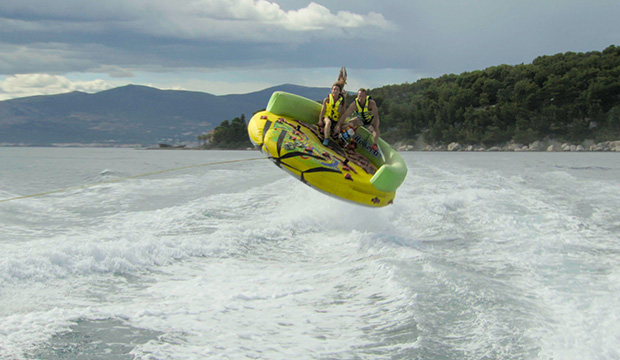 After back-to-back weeks of U-Turn drama on “The Amazing Race,” Leg 9 is here to give us airport drama!

The remaining six teams are off to Split, Croatia, on Wednesday’s episode, but first, they have to buy tickets. And in a throwback to the early seasons of the show, this doesn’t come easily. And then there’s the fact that Team Fun, Becca Droz and Floyd Pierce, may or may not have cut in front of Nicole Franzel and Victor Arroyo in line. The sneak peek doesn’t show the alleged cutting, but Vicole can’t get the early flight they want. Don’t worry, though, because the early flight, carrying multiple teams, actually gets delayed. This is the drama we are here for.

Once in Split, the teams have to recite poetry “while in motion,” per CBS, and go tubing in some gnarly waves. The Travelocity gnome also makes his long-awaited return… only for Colin Guinn and Christie Woods to forget him somewhere.

Tyler Oakley and Korey Kuhl nabbed their third consecutive first-place finish last week, which means every leg has still been won by a “Race” team. With Rachel Reilly and Elissa Slater getting the boot, only two non-“Race” teams are left, Nicole and Victor, and Chris Hammons and Bret LaBelle.

Below, check out our minute-by-minute blog of the June 12 episode.

8:00 p.m. – As the winners of the the last leg of the race, Tyler and Korey are the first to receive a clue that their next destination is Kasjuni Beach in Split, Croatia. They’ll meet up with the traveling gnome, which they’ll have to carry with them throughout this leg. Let’s race!

8:10 p.m. – At the Zurich airport, teams are all clamoring to book the first flight to Split. Tyler/Korey and Chris/Bret booked an early flight and the other teams are desperately seeking out a way to get on board. Victor/Nicole think Team Fun cut in front of them and Nicole passively aggressively says, “It’s just frustrating when people cut,” but Team Fun pays her no mind. Vicole will have to run to find tickets somewhere else. It appears Team Fun got the last tickets on the earlier flights and Nicole is about to cry.

8:20 p.m. – Vicole is begging to get on any flight and they agree to a standby ticket. It turns out, they’ll actually be flying solo on a flight that lands just 10 minutes after Tyler/Korey and Chris/Bret and an hour before the other teams! The first flight lands as scheduled and Chris/Bret are the first to receive their first challenge. They must fill six, filled-to-the-brim glasses of punch to local sunbathers relaxing on the beach. That’s where they’ll pick up their gnome, and after returning their empty bar tray to the bar, they’ll receive their next clue. Vicole has arrived safely as well, but Team Fun, the Afghanimals and Colin/Christie are delayed back in a German airport. It looks like Nicole and Victor’s misfortune was actually a lucky break.

8:30 p.m. – Chris and Bret are the first to reach the Detour: ‘Poetry in Motion’ or ‘Wash in From the Ocean.’ In this Detour, teams have the option of race on a fly tube as they remember a tongue-twisting poem OR use snorkeling gear and a metal detector to find a goblin and five ancient coins. Chris and Bret opt for the snorkel gear and appear to have a solid lead. Tyler and Korey along with Victor and Nicole decide to hit the waves. The other teams finally arrive in Croatia, but on their seventh attempt, Vicole nails their poem and launches themselves into first place. They’re heading to Diocletian’s Palace for their next clue. Tyler and Korey are hot on their heels and Chris/Bret are frustrated with the snorkeling and decide to scrap it and head to the Poetry in Motion challenge with their lead squandered. After one attempt at the poem, now they want to go back to snorkeling. What a mess!

8:40 p.m. – Tyler and Korey seem to have had the better cab ride and reach the Road Block in first place. In this challenge, one player from each team must keep track of five soldiers who have red ribbons around their helmets, after they’ve covered themselves up with their shields. This might get tricky! Korey and Nicole decide to play nice and help each other with the challenge to maintain their lead. Meanwhile, Chris/Bret change their minds a second time and head to the poetry challenge. You’ve got to be kidding me! Even with each other’s help, Nicole and Korey are struggling at the Road Block. Finally, after seven attempts, they complete the challenge. Tied for first, they’ll now race to the Pit Stop: Matejuska at Split Harbor. Since nothing comes easy, they’ll have to row there in a dingy.

8:50 p.m. – Tyler and Korey win their fourth leg in a row, narrowly beating out Victor and Nicole at the Pit Stop. They have won a trip for two to Mexico. Meanwhile, Team Fun continues their own hot streak and are the next team to reach the Road Block. Floyd nails the challenge and they’re heading to the Pit Stop. Colin and Christie make quick work of the Poetry challenge and the Afghanimals begin fighting with each other out of frustration. They’ll likely be battling Chris/Bret to avoid elimination. But wait! Colin and Christie forgot their gnome! They have to travel back to the Detour, where the Afghanimals  just completed the challenge and Chris/Bret appear close to doing the same. Colin/Christie may suddenly be in last place.

8:59 p.m. – Colin and Christie find their gnome and realize they’re still ahead of Chris and Bret. At the Road Block, Leo and Christie decide to work together in hopes of avoiding last place. Their teamwork pays off and their headed to the Pit Stop. Chris and Bret are able to complete the leg, but after finishing in last place, they’ve been eliminated from the race. Victor and Nicole are now the only non-“Amazing Race” team remaining. That’s a wrap!