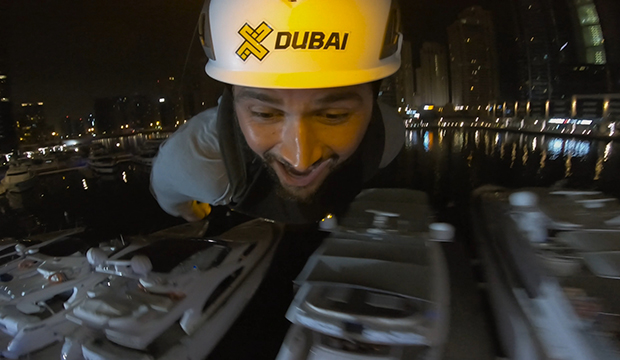 “The Amazing Race” is finally back! OK, it was only off for a week, but doesn’t Corinne Kaplan and Eliza Orlins‘ elimination feel like 4,593 years ago? Anyway, as a reward for our patience, we have two episodes, starting in a new time slot, 8/7c.

In the first hour — Leg 5 — the teams will travel from Ho Chi Minh to Dubai, where they will go ziplining and hunt for giant eggs in a dinosaur park dressed as Tyrannosaurus rexes. This is already the best leg so far. Leg 6 will take them to Uganda, where the Head-to-Head Battle will make an appearance to be all, “Surprise, bitch!”

SEE Don’t forget ‘The Amazing Race’ returns at a new time this week (with a double episode!)

There are eight teams left: four from “Race,” one from “Survivor” and three from “Big Brother.” “Big Brother” is the only franchise not to lose a team yet. Can it keep this streak up for two more legs?

Meanwhile, the first four legs have all been won by “Race” teams. Will that also continue or can, say, perennial bridesmaids Nicole Franzel and Victor Arroyo break through?

Below, check out our minute-by-minute blog of the May 22 episodes.

8:00 p.m. –  As the winners of the last leg of the race, Colin/Christie are the first to head to their next destination, Dubai! They’re tactic is to focus on themselves and ignore the surrounding chaos and so far it’s worked out! They’ve been a top four finisher in each leg so far. Leo/Jamal (aka the Afghanimals) are thrilled to head to Dubai, feeling ever so close to their “motherland.” They’re hoping to rebound back to the top of the pack after a couple of rough weeks. All the teams will be on the same flight. Let’s race!

8:15 p.m. – Chaos ensues as everyone runs for the taxis upon landing. Everyone arrives at a bonfire surrounded by luxury cars and a group of men waiting to share some tea (the drink, not the gossip!). Teams got their next clue, which was to head to the top of the Dubai Frame and Rachel/Elissa are in the lead, but their taxi driver took the wrong exit! A few other teams reach the Dubai Frame first, but the Afghanimals are the first to the clue box. In the Detour, teams will have to leap off Dubai’s highest building. It’s twice as high as the Empire State building! The other option is searching a garden for five different colored eggs. I’d take the leap if it were me and the Afghanimals and Colin/Christie agree. Only two teams can take the leap at a time, so others are choosing to search for eggs. Meanwhile, Rachel/Elissa are still in cab hell.

8:30 p.m. – First come, first serve and Leo/Jamal and Colin/Christie are the first to take the leap. After realizing how many people have chosen to search for eggs, Rachel/Elissa take their chances and head back to the jump challenge, hoping to gain ground. The teams searching for eggs are all dressed as Tyrannosaurus rexes, but other than that the challenge is pretty basic. Meanwhile, Leo/Jamal are ready to take the plunge, but are disappointed to learn it’s a virtual reality mission. Oh well, it still looks fun! Following the jump, they find out they have to take a five question quiz (individually) about what happened. Another surprise that makes this challenge more difficult. Meanwhile, back at the egg challenge teams are snatching them left and right but Janelle is frustrated with Britney’s inability to keep up the pace. Out of nowhere, Chris/Bret finish the egg challenge and launch themselves into first!

8:45 p.m. – Teams from both challenges are finishing up at this point and are in hot pursuit of Chris/Bret. They reach Soho Garden and learn what the Road Block is. They enter a club where everyone is wearing headphones, so it sounds silent, but everyone is listening to dance music. A few party-goers are actually following the DJ and players must find someone dancing to the DJ’s beat relying only on their observation. Floyd is pumped for this challenge, but all the teams are struggling. No teams are struggling more than the Afghanimals and Rachel/Elissa who keep failing the exam at the Detour. They are in last place. Meanwhile, Floyd’s excitement at the dance challenge pays off and he propels himself and Becca into first place. They’ll hop on the world’s largest urban zip line to the Pit Stop at Dubai Marina.

9:00 p.m. – After another taxi ride, it turns into a foot race and it’s going to be a close race for the win. But back in the Road Block, Leo nails it on his first attempt and Rachel/Elissa could be on the verge of elimination unless Rachel can pull off a miracle. Sure enough, she finds the right person on her first attempt but has a total meltdown in the taxi to the Pit Stop while Elissa consoles her. Meanwhile, it’s Team Fun that lands their second victory as Becca/Floyd are the first to reach Phil. They’ve won $5,000 each for their trouble. Rachel sobbed all the way to the finish line, but with a partial smile in appreciation for a great experience. Rachel/Elissa finished in last place, but it’s a non-elimination leg! The race continues.

9:10 p.m. – As the winners of the last leg of the race, Team Fun is the first to head from Dubai to Uganda. After touching down, teams must grab a taxi to the capital of Kampala for their next clue. Tyler/Korey are feeling emotional heading to a country where LGBTQ+ people can’t live as openly as they do in the USA. Nicole tells them to just kick some ass in Uganda.

9:20 p.m. – The teams land in Kampala and race for the taxis to head to the Kampala National Mosque. They change into mosque-appropriate clothing and must count steps to the top of a tower. Tyler and Korey had done research prior to the challenge and had read that there were 304 steps, but unfortunately there are only 272. They’ll have to go back and count. Victor/Nicole get it right and they’re now in first place followed by Colin/Christie. They’re now headed to Owino Market for their next clue. Rachel/Elissa are on their third attempt at counting stairs, but lucky for them Team Fun and Janelle/Britney were stuck in traffic and haven’t even arrived yet.

9:30 p.m. – Teams are scrambling for the clue box, but Victor/Nicole are the first to find it. In this Road Block, teams must make a rolex sandwich after shopping for the proper ingredients. It’s basically a delicious looking fried, rolled omelet. Victor shows off his cooking skills and keeps him and Nicole in first place, heading to Ggaba Landing Site for their next clue. Rachel/Elissa arrive and find that they’ll have to complete their Speedbump and are already in last place. They’ll have to do some laundry by hand washing dirty clothes and finding a place to hang them.

9:40 p.m. – Rachel/Elissa have completed their Speedbump, so if they do well in the Road Block, there are still teams they can catch. Janelle can’t even find the cooking station because she’s looking for a watch. Meanwhile, Colin/Christie, Victor/Nicole and Tyler/Korey all reach the Detour at virtually the same time. Teams will have to catch fish and preserve them in salt OR load firewood onto a bicycle, transport it and stack it appropriately. The first three teams all decide to transport wood. Back at the Road Block, Janelle is still lost and her and Britney are the only team still there. Janelle finally realizes the rolex stand was right in front of her the entire time and it is not a watch stand. She begins to cry in frustration. Over at the Detour, Tyler/Korey are the first to finish stacking wood and are headed to the season’s first Head to Head. Moving one drum at a time, players will have to stack drums in a color specific pattern. The winner will check in to the Pit Stop and the loser must wait to compete against the other team.

9:59 p.m. Rachel/Elissa reach the Road Block in seventh place, but are the first team to choose fish preservation. They’re comfortable gutting/cleaning fish and feel confident. Will they gain any ground? Tyler/Korey reach the Head to Head and learn their competitors will be Colin/Christie. It will be Tyler taking on Colin in the drum stacking competition. Tyler wins and Tyler/Korey have won a trip for two to Singapore as the winners of this leg of the race. Colin then narrowly defeats Victor; Victor defeats Chris; Bret defeats Floyd; Floyd defeats Leo; Jamal defeats Rachel. It will now be a final face-off of the “Big Brother” moms and they’re emotional that two of them will be leaving. In the end, Rachel defeats Britney. In tears, the “Big Brother” ladies hug it out and Janelle/Britney have been eliminated.