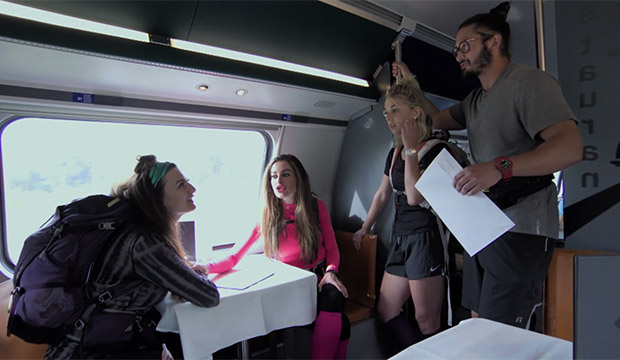 So we were partially right. The “Big Brother” feud between Rachel Reilly and Elissa Slater, and Nicole Franzel and Victor Arroyo on Wednesday’s “The Amazing Race” involved a U-Turn, but not the U-Turn Vote (that’s next week — that Swiss flag don’t lie!). Instead, their argument was about… well, we don’t blame you if you have no idea. So let’s try to break this down.

It all started when the Reilly sisters ostensibly let bygones be bygones with Team Fun, Becca Droz and Floyd Pierce, whom they had U-Turned on Leg 2, over beers with the Afghanimals, Leo Temory and Jamal Zadran, before their flight to Zurich. Team Fun and the Afghanimals agreed that the top U-Turn targets going forward are Colin Guinn and Christie Woods, and Nicole and Victor, given their high finishes so far. Rachel and Elissa were not on board since they had formed a secret “Big Brother” alliance with Team Vicole and the dearly departed Janelle Pierzina and Britney Haynes, but nodded and played along.

On the train in Switzerland, the Reillys wanted to warn Nic and Vic that Team Fun planned to U-Turn them. And this is when things get utterly confusing. Guys, if you want us to understand your drama and take your side, stop talking over each other! Don’t you know optimal reality TV arguing techniques? You scream over each other at the end! The constant editing and talking head insertions that didn’t exactly provide context didn’t help either.

But from what we could make out, Nicole and Victor wanted to confirm with Team Fun that they wanted to U-Turn them, with which the Reilly sisters — Rachel especially — took umbrage because they think Nicole and Victor should trust them since they’re in an alliance. But Nic and Vic were obviously right to feel uneasy about the intel since the Reillys weren’t completely forthcoming and were vague with details: They said they overheard Team Fun saying they wanted to U-Turn Nicole and Victor when in reality it was an explicit conversation — that, to be clear, they did not start — and they said that “other teams” were there when it was just one other team, the Afghanimals. They were deliberately evasive and Victor smelled something was up.

The highlight of this blowup, of course, was Rachel telling Nicole that her brand is on stake here. Truly on brand (no pun intended).

Anyway, this fight was dumb, confusing and totally unnecessary. The Reillys could’ve kept that U-Turn secret to themselves. They were “doing the right thing” by warning Nicole and Victor, but they were trying to have it both ways here. They didn’t want to implicate themselves as having been part of the conversation, so they said they overhead it, and claimed multiple teams were there because the more people, the less suspicious it looks for them, since they had actually made a new agreement/soft alliance with Team Fun and the Afghanimals.

Plus, Rachel has made no secret of the fact that she views Team Fun as their No. 1 threat and literally said in a talking head that she wants them U-Turned again. In the Reilly sisters’ ideal scenario, they thought that them telling this scoop to Nicole and Victor would incentivize (shout-out to Vanessa on “BB 17”!) the couple to target Team Fun and do the Reillys’ dirty work so they can sit back and watch those two teams battle for the U-Turn. It may have worked if they had been completely truthful — though Nicole and Victor seem intent on playing a clean game without “Big Brother”-esque backstabbing — but their equivocation and backtracking set off alarm bells and then they got majorly defensive when Victor started questioning the inconsistencies in their story. Totally not suspicious at all.

So now the “Big Brother” alliance is no more. And we got another super awkward mat confrontation. But Nicole and Victor getting saved by the non-elimination ensures another week of this “Big Brother” feud, and the U-Turn talk and anxiety perfectly cue up next week’s U-Turn Vote. TPTB couldn’t have scripted this better if they had tried.