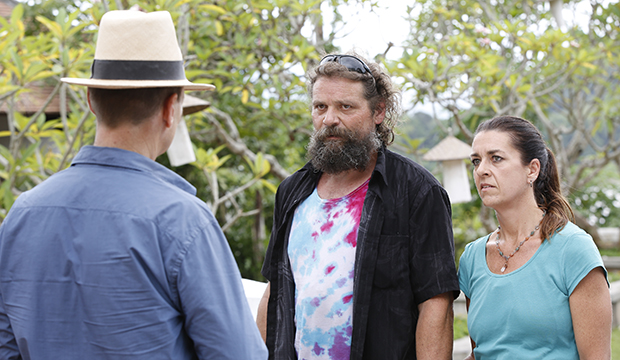 Rupert and Laura Boneham survived the first leg of “The Amazing Race 31,” when Art Velez and JJ Carrell opted to take a four-hour penalty, allowing the “Survivor” alums to overcome their own four-hour, uh, excursion in the park in Tokyo. But their luck ran out on Week 2 in Laos. While they weren’t one of the two teams U-Turned, Rupert was betrayed by his favorite animal, an elephant, as the pachyderm he was riding put him at the back of the pack. At the mat, Rupert, a four-time “Survivor” vet, told Phil Keoghan that “‘Amazing Race’ kicked me in the ass.”

How so? And has he forgiven elephants yet? Find out in our exit interview below. Plus: What you didn’t see on the show and if the couple will complete the CBS reality trifecta and do “Big Brother.”

Gold Derby: What was it like watching the episode?
Rupert: Watching the other elephants come running out of the pen just reminded me of the tuk tuk, which you didn’t see us having to stop for fuel and get help with directions and waste 20, 30 minutes, giving Tyler [Oakley] and Korey [Kuhl] a chance to catch up to us. Then we got to the elephants — oh my gosh, it was like reliving it all over again. It was a little hard to watch.

Laura: It was a rough day.

Rupert: It took me a good hour, it seemed, to even coax the elephant out. By the time we had to leave the little compound, the others were already coming back. That was bad.

GD: Why did you have so much trouble with your elephant?
Rupert: Ours was the last one to go. It didn’t really want to leave the little pen area they had him in. Once it got out, it was way more interested in eating than anything else. I could cry, I could beg, I could plead — it wouldn’t go. In a clip online you could see me throw bananas in front of its face to go get the banana, but it wouldn’t move forward. It was eating stuff on the side of the trail.

Rupert: It was a slower, younger one. I was hoping we would get one of the bigger ones, but there was no chance. They were already gone, so I had to take what was left.

GD: Are elephants still your spirit guide after that? Have you forgiven them?
Rupert: Oh, even at the time, I had forgiven the darn elephant. I can’t blame my spirit guide that I work with in my mentoring program. I know how sometimes the younger elephants don’t always listen.

GD: Laura, what were you thinking watching him struggling on the elephant, knowing you’re last?
Laura: It was just so frustrating because there was nothing he could do, there was nothing I could do. I could just watch. I was just hoping it was a non-elimination. Surely they don’t want us out, right? [Laughs] It has to be a non-elimination! That was always my hope for the both of us. Rupert felt so bad, but there’s nothing you could do! He kept apologizing, he felt terrible that he lost the game, but it was the elephant! It was a rough day. There was a part you didn’t see; we had a rough time with our tuk tuk guy. I think it was his first day on the job.

GD: What happened? He had to get gas and got lost?
Rupert: Well, we were feeling pretty good after we left the alphabet challenge. We knew that would be the tougher challenge, but we wanted to see the kids and get empowered by their youth and hear their little cheers. We [finished] in the middle [of the pack] and we were all running around to get a tuk tuk. We saw a bunch of them, and Bret [LaBelle] and Chris [Hammons], and Laura and I all got in the same tuk tuk. We were too darn nice and I said, “OK, we’ll get another tuk tuk,” and that started our big slide with our new tuk tuk. That was it. That was the move that did it. I needed to be tougher and meaner and say, “No!’ [Evil laugh]

GD: You’re supposed to outwit and outplay them.
Rupert: Yeah, I wanted to work with the “Survivor” guys. I didn’t want to make adversaries right off the bat, especially with Chris and Bret.

GD: At the beginning of the leg, you guys were in a tuk tuk with the Afghanimals, and Corinne [Kaplan] and Eliza [Orlins] blocked you guys. They were running in front of you in the street. What did you think of that because they made it sound like they did it because of the Aghanimals, not because of you?
Rupert: Well, with Corinne already calling me fat and old, they were probably thrilled with seeing us out of the game! We honestly were very happy with trying to partner up with the Afghanimals. I don’t know why everybody else wasn’t, even though they’re not playing as honorable as maybe we would, but they’re still pretty great guys. I’m not crazy about the Corinne and Eliza team play.

Laura: Yeah, they talked about having the Survivors’ backs and Survivors stick together, but then they pull something like that. That’s a little confusing. They acted like they didn’t know we were in the back or something.

GD: They definitely knew. Let’s go back to your first leg in Tokyo, when you got lost for four hours in the park. You guys joked that you were looking for an immunity idol, but I also feel like there was a bit of truth to that. What happened there?
Laura: We went from first to last! [Laughs]

Rupert: We were pulling out our flashlights, thinking we were looking for a hidden clue. Oh my God! Such a newbie mistake. It was terrible. But our learning curve was good. We were getting better. I will admit I should’ve listened to Laura when she said maybe it’s not in the park and I said, “It’s gotta be in this park.” Not knowing that there were five other parks if you keep walking down the road, but it really wasn’t that far. You saw it on TV. It was in the distance; you could see Mount Fuji. But us, having been on “Survivor,” we were looking for a hidden clue when we should’ve been looking for something under lights and out in the open. But we learned from that pretty quickly; we just didn’t get a chance to show it! [Laughs]

SEE Corinne and Eliza dragged the Afghanimals hard on ‘Amazing Race,’ and we’re so sad this scene was deleted [WATCH]

GD: Were you surprised by who was U-Turned? It was racers targeting racers. Rachel [Reilly] is repping “Big Brother,” but she’s been on “Race” twice and was the one who wanted to use it.
Rupert: Not really. Just by watching how they talked and how they acted and how they played the game. I know returning players are always better at the game. I have been a returning player on “Survivor.” I loved playing “Survivor” with new players. They’re so much easier to control and are just new to the game. In “Amazing Race,” the Survivors, the Big Brothers are on a learning curve. The racers know they’re playing against the other racers right now. It’s a tough game. Just like you saw me after we were defeated, I admitted the game just was tough. In “Amazing Race,” you’re in panic mode the entire time you’re there. In “Survivor,” I can go out into the ocean and swim around and be by myself and relax and maybe see a big fish swim by. Not in “The Amazing Race.” There is no downtime.

GD: Laura, do you agree that it also kicked your ass?
Laura: I’m a runner, but it was tough. We definitely overpacked. We had like 20 extra pounds. You’re running around with heavy bags, there’s sensory overload, there are a million people — especially in Tokyo — pouring down rain, can’t read the signs. Yeah, it’s tough. You have to depend on each other and others. You can ask people which way to go, but there might be [a language barrier]. It’s really different. I’m definitely more set up for an island lifestyle.

GD: You’ve done “Survivor” and now “Amazing Race.” Would you do “Big Brother”? There’s no running there. You can sleep indoors.
Laura: I think maybe Rupert might do it, but I really don’t have any desire to do “Big Brother.” It’s what? Three months?

Rupert: That would be tough on me to be gone for three months with my mentoring program. I’m the lead mentor, I have to be there five, six days a week.

GD: Yeah, that’s a lot shorter. Three weeks. We can start the campaign now.
Rupert: Yeah! Right, I could do that. There you go!