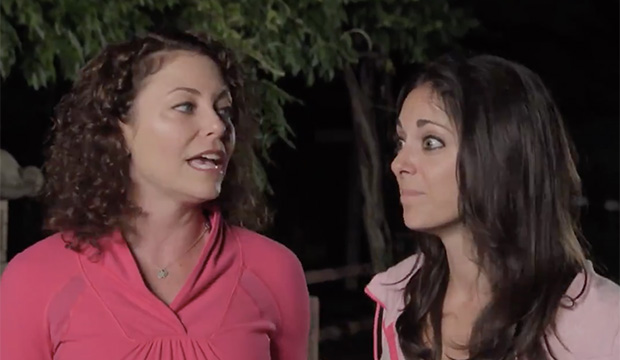 It remains to be seen if “Survivor” alums Corinne Kaplan and Eliza Orlins will outlast all the other teams on “The Amazing Race 31,” but they’re definitely trying to outwit and outplay them.

In a sneak peek from Wednesday’s episode (watch below), the teams are en route to a location in Laos. The Afghanimals, Leo Temory and Jamal Zadran, and Rupert and Laura Boneham hop into a tuk tuk to take them there, after which Corinne and Eliza realize they’re in the tuk tuk’s way in the middle of the road. While you and I might step aside so we don’t, you know, get run over, Corinne and Eliza decide to take advantage of their pole position and run in front of the tuk tuk so it doesn’t pass them. Well, a tuk tuk is not that big, you say; it can just pass them on the side. Nope, they were swerving all over the place to block its path. At least there weren’t any cars around.

“They were throwing their bodies in front of the tuk tuk,” Jamal says in a talking head. “Maybe that’s what they teach you on ‘Survivor’: how to run like a snake so you don’t get a blow dart.”

Tension is high on this Wednesday's episode of The #AmazingRace. 👀 pic.twitter.com/F9CQ9HBeNo

Given their willingness to be the mean girls of the season, Corinne and Eliza probably would’ve blocked whoever was in the tuk tuk, but they desperately wanted to keep the Afghanimals at bay, even if it just means they’re like 12 feet behind them. (Their “Survivor” brethren, Rupert and Laura, were just collateral damage.)

SEE ‘The Amazing Race’ spoiler: The Detour options on the Double U-Turn-powered Leg 2 are…

“The Afghanimals looked like they were having the most fun when we watched them on TV,” Eliza explains. “And then they just weren’t that fun or that helpful. Or nice.”

You mean like you were when you called Nicole Franzel and Victor Arroyo “Team Dum Dum”?