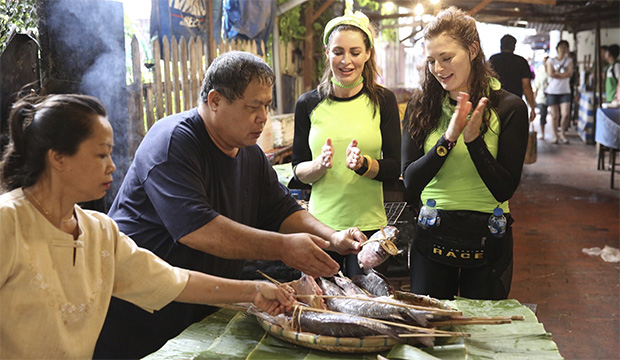 We haven’t even had a regular Detour yet on “The Amazing Race 31,” but there will be a Double U-Turn on the second leg — and now we know what the tasks are.

Eliza Orlins and Rachel Reilly each tweeted sneak peels of Wednesday’s episode that conveniently shows their own team doing one of the two Detour options in Laos, which the U.S. version of the show had never been to before now. The teams can either learn the Laotian alphabet or to cook.

Eliza and Corinne Kaplan opt for the Laotian alphabet, which they liken to sounding like a Boston accent. That’s not inaccurate; they sound like they’re just dropping Rs from every word and are this close to reciting “Pahk the cah in Hahvahd Yahd.”

“It just sounds like a Boston person saying everything,” Corinne says. “This entire thing is just Bret [LaBelle] language.”

“It’s true. Bret would be good at this. Too bad he’s cooking,” Eliza says of the Boston cop. Also, thanks for confirming the other Detour is cooking!

That’s what Rachel and Elissa Slater are doing. Rachel shared a photo showing the duo getting fish from a market stand for what we’re assuming is a traditional Laotian dish.

Neither of these two Detours sounds too difficult or time-consuming for any U-Turned team. We don’t know who is U-Turned or who uses them, but a previously released photo suggests the Afghanimals, Leo Temory and Jamal Zadran, are about to use the second one — perhaps as a survival tactic after getting U-Turned themselves.