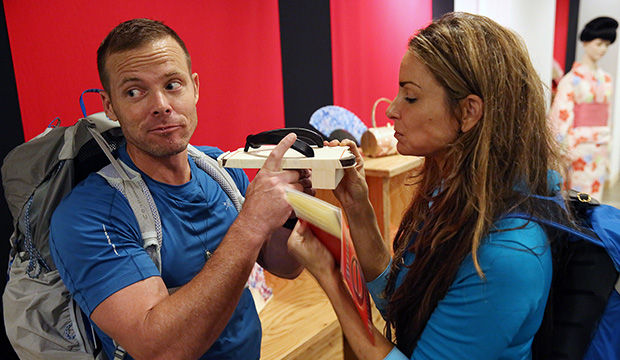 Colin and Christie, is that you?

Fans of “The Amazing Race” who tuned into Wednesday’s Season 31 premiere expecting more angry, ruthless tactics and lots and lots of screaming from Colin Guinn and Christie Woods were in for a rude awakening. Or actually, a nice awakening. Because Colin and Christie are totally chill and zen now, and it was honestly more unsettling than when they were intense and high-strung back in Season 5. They do meditation now, they’ve mellowed out since they’ve had kids, Christie is a life coach.

Don’t get us wrong — we’re not saying people can’t or shouldn’t change. And tons of people have definitely changed from hotheaded twentysomethings to responsible, mature parents pushing 40 (it’s also hilarious to think how they’re now at the stage of life where Chip and Kim were in Season 5). It’s cool to see that they’ve grown and calmed down since he almost got arrested over a cab fare 15 years ago — he’d probably apologize and leave a hefty tip today — but it’s also kind of weird. We are not used to this.

For better or worse, Colin and Christie, and their intensity and short fuses were iconic. They made Season 5 as good as it is and were television gold. Colin’s “My ox is broken!” meltdown is a Hall of Fame moment, and now he just casually talks about it like it’s NBD. Points to Christie for the “My sand is broken!” line.

They’re laughing, smiling, joking around, and are more chilled out than a stoned teenager. Colin closed his eyes and meditated while Christie did the sandal Roadblock. In the sneak peek below of next week’s episode, they wax poetic about Laotian monks “blasting out love and compassion to the world.” This ain’t your grandma’s Colin and Christie anymore.

Their racing skills haven’t diminished at all though. Granted, the first leg in Tokyo was pretty straightforward, but they rocked it and got second place.

Will this this New and Improved Colin and Christie last all the way until the end? There’s probably a few of us out there who hope killer fatigue wears down that zen-ness for at least one broken ox-esque meltdown for old times’ sake. We’re sure producers want that type of content too. And if it doesn’t happen, as a “Race” legend would say, “This is bullsh–!”