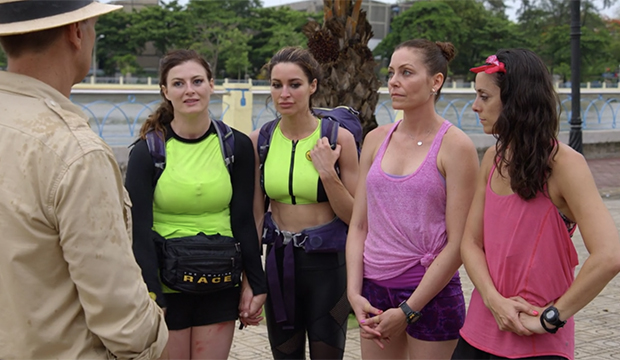 So that was awkward. Wednesday’s episode of “The Amazing Race” ended with possibly the most uncomfortable elimination ever.

Corinne Kaplan and Eliza Orlins got the boot, arriving at the Pit Stop minutes after their nemeses Rachel Reilly and Elissa Slater, and they — Eliza especially — could not deal. Rachel offered some platitudes about respecting them as racers and as women, which the “Survivor” alums immediately dismissed with eye rolls.

“It was definitely worse because it was to Rachel and Elissa,” Eliza said in a talking head. “And then to have to stand their at our elimination on the mat with Rachel and Elissa, who are like, ‘We respect you as women.’ I was like, get out of here with your fake B.S. Like I have no interest in hearing from them or speaking to them ever again.”

Corinne and Eliza then moved to the side, where Eliza broke down. “I just couldn’t cry on the mat in front of them. I’m not going to give you the satisfaction. I hate them so much. I don’t ever want to see their faces again,” she said, while the Reilly sisters, Phil Keoghan and the cute little girl at the check-in stood there in silence.

“I believe I said this earlier,” Corinne added. “I won’t be attending any parties or speaking with any of these people.”

This was probably the most awkward axing since Jessica and John‘s in Season 22, when they stupidly did not use their Express Pass and then told Phil they didn’t need the $1 million, eliciting that notorious “Oy vey” from him.

But whereas that was awkward in a funny way, this was cringe-worthy. Corinne and Eliza’s disappointment and anger at getting eliminated is understandable and they were obviously very emotional in the moment after a rough day, so you can chalk it up to that. Like with the Afghanimals, their beef with the Reilly sisters feels one-sided, because as far as viewers know — because this is all we’ve been shown — it started this leg when Corinne and Eliza tried to take Rachel and Elissa’s original cab that they had asked to wait for them. But Corinne and Eliza were the ones acting like they were wronged when they were the ones who tried to steal the cab. Their excuse was that Rachel and Elissa would’ve stolen theirs, which doesn’t make sense when you think about it because it still doesn’t make it right and you know Corinne and Eliza would’ve been pissed as hell if Rachel and Elissa had swiped their taxi.

Then again, this is all in line with Corinne and Eliza’s eagerness to be the villains of the season. They don’t need or want you to like them, and it’s kind of refreshing. The “Race” will definitely not be the same without them.

IRL, it seems that they’ve all let leg bygones be bygones. Elissa and Corinne both responded to a fan on Twitter that it’s all good between the teams now.