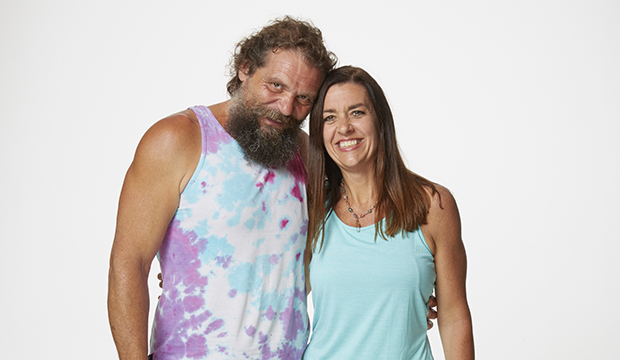 “The Amazing Race” fans are about to be introduced to one of the greatest reality TV heroes of all time: Rupert Boneham. Longtime “Survivor” viewers are already keenly aware of this tie-dye pirate from his four seasons starring on that CBS hit. Though he never claimed victory as the winner of “Survivor,” he did take home a special fan-voted prize of $1 million during 2004’s “America’s Tribal Council.” He’s that beloved.

In the upcoming 31st season of “The Amazing Race,” which will now debut April 17 on CBS, Rupert will be teamed up with his wife Laura Boneham, who previously competed against Rupert on “Survivor: Blood vs. Water” in 2013. Laura finished in 12th place that season, far outlasting her husband as he was the first person voted out of what turned out to be his fourth and final run on the show.

But we’re getting ahead of ourselves. The very first time audiences were introduced to Rupert was back in 2003, for “Survivor: Pearl Islands.” That seventh season had a pirate theme, which Rupert happily embraced as he took it upon himself to steal the opposite tribes’ shoes in the premiere episode. Rupert provided food for his fellow tribe mates by fishing for them on a daily basis. In fact, he was so likable and physically fit that his competitors knew he’d be a threat to win, so they voted him out in 10th place soon after the merge.

Rupert was such a stand-out personality that producers asked him back for the very next cycle, “Survivor: All-Stars.” Since the seventh and eighth seasons filmed back-to-back, Rupert was at an incredible advantage because most of the other All-Stars had no idea who Rupert was since his initial season hadn’t aired yet on TV. He ended up being unanimously voted out in fourth place after the dynamic duo of Rob Mariano and Amber Brkich convinced Jenna Lewis that none of them would ever win if Rupert was in the finals.

In “Survivor: Heroes vs. Villians,” Rupert’s third chance at victory also proved to be a major disappointment. This time around he made it all the way to sixth place, but was sent to the jury when the remaining Villains (including Sandra Diaz-Twine, his fellow “Pearl Islands” buddy) used their numbers advantage to take out Rupert. Fellow Hero Colby Donaldson was voted out soon after, which meant that the Final 4 consisted only of Villains: Jerri Manthey, Russell Hantz, Parvati Shallow and ultimate winner Sandra.

How will Rupert and Laura do now they’re competing against 10 other teams of veteran reality stars on “The Amazing Race”? Get a closer look at all of this season’s competitors by clicking through our photo gallery below. Other former “Survivor” contestants include Chris Hammons & Bret Labelle and Corinne Kaplan & Eliza Orlins.