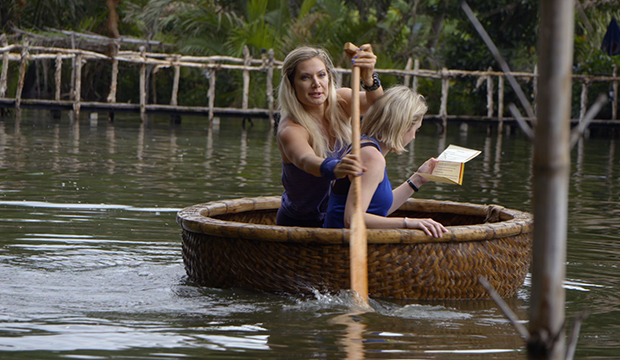 Four weeks into “The Amazing Race 31,” the only teams to have won legs are, well, “Race” alums. The Afghanimals, Leo Temory and Jamal Zadran, won the first two, followed by Team Fun, Becca Droz and Floyd Pierce, who dominated Leg 3, and Season 5 runners-up Colin Guinn and Christie Woods recovered from a Detour flub to take Leg 4 on Wednesday. It’s no surprise that the “Race” veterans are ruling the course right now, but which non-“Race” team — there’s one “Survivor” duo left, while all three “Big Brother” ones are still around — will be the one to end this streak?

The obvious answer is Nicole Franzel and Victor Arroyo. As Phil Keoghan noted in Wednesday’s episode, the “Big Brother” lovebirds have performed the best out of all the “Survivor” and “Big Brother” teams, finishing sixth, second, second and second. They probably would’ve won the second leg if not for Nicole falling for the Afghanimals’ lie that she was going the wrong way, making her hesitate. They’re knocking on the door to leg win and it would certainly be deserved, but you still have to go out there to get it. And anything can happen on a brand new leg.

Chris Hammons and Bret LaBelle could definitely attest to that. The “Survivor” pals had been struggling, finishing one spot lower each of the first three legs, going from seventh to eighth to ninth. A non-elimination on the third leg gave them a second life and they took advantage of it on Leg 4, overcoming the (rather easy) Speed Bump and making up time at the motorbike Roadblock to finish in third place. They jumped from ninth to third, making it one of the best NEL comebacks ever.

Janelle Pierzina and Britney Haynes haven’t finished better than fifth place, which they accomplished on Leg 2; they were eighth on Leg 1, sixth in Leg 3 and seventh in Leg 4. They’ve neither adjusted as well as Nicole and Victor nor have they had as many struggles as a pre-Leg 4 Chris and Bret; they’re just kind of… there. To borrow a “Big Brother” term, they’re floaters right now. But with numbers dwindling, this is not gonna cut it anymore and they have to step it up, which they’re definitely capable of.

Rachel Reilly is a “Race” vet, with two third-place finishes, but we’ll include her here since she’s technically repping “Big Brother” with her sister, Elissa Slater, who has never done “Race” before. After nabbing fourth and third on the first two legs, they’ve plummeted to seventh and eighth. Leg 4, especially, was a roller coaster, since they were in second through most of the leg, but stubbornly stuck with the harder Detour, nearly letting Corinne Kaplan and Eliza Orlins pass them. Rachel was the one who U-Turned Team Fun in Leg 2, so you know she’ll do whatever it takes to win. Plus, we already know that the Reilly sisters survive until at least the U-Turn Vote.