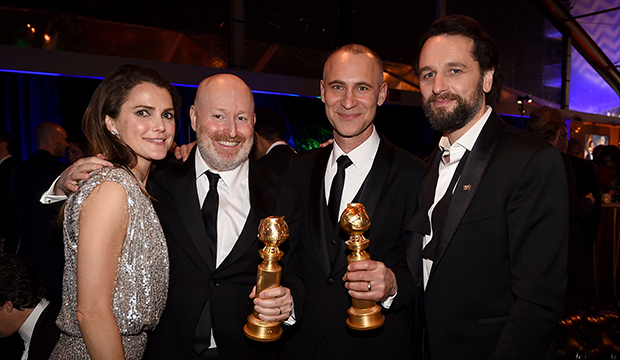 “The Americans”‘ farewell tour continued Sunday with its first Golden Globe win — and it was a big one, Best Drama Series. It did not win either of its acting categories, for Emmy champ Matthew Rhys or Keri Russell, making it the first show to take home a series Globe without a corresponding acting award since “Modern Family” in 2012.

The Hollywood Foreign Press Association often likes to pair its series wins with an acting award. For the previous six years, all of its drama and comedy/musical series champs saw at least one of its actors triumph.

2018: “The Handmaid’s Tale” and Elisabeth Moss; “The Marvelous Mrs. Maisel” and Rachel Brosnahan

2016: “Mr. Robot” and Christian Slater; “Mozart in the Jungle” and Gael Garcia Bernal

2015: “The Affair” and Ruth Wilson; “Transparent” and Jeffrey Tambor

In 2012, drama had an acting-series pair with “Homeland” and Danes, but Best Comedy/Musical Series went to “Modern Family,” which lost both of its acting bids, for supporting players Eric Stonestreet and Sofia Vergara. “Modern Family” was in a similar boat as “The Americans,” in that the Globes had yet to award the then-two-time reigning Emmy champ, having given its comedy/musical series prize to “Glee” in back-to-back years. So it was a case of playing catch-up.

“The Americans” has never been a Globes favorite — it had never even been nominated for Best Drama Series before this year, for its sixth and final season. The nomination, along with bids for Rhys and Russell, both of whom were nominated two years ago, felt like it was the HFPA’s way of not looking out of touch after “The Americans”‘ Emmy wins for Rhys and Best Drama Writing.

Few envisioned the HFPA would actually give them the top prize. “The Americans” was in third place in our Globe odds, behind “Killing Eve” and “Homecoming,” with many likely presuming the Globes will do its classic series-acting pairing with “Killing Eve” and its star and Globes co-host Sandra Oh, who won Best Drama Actress. Plus, “Killing Eve” is a new show, as is “Homecoming” and the other nominees, “Pose” and “Bodyguard,” which is Globes catnip. “Breaking Bad” was the last show to win the Best Drama Series Globe for its final season — another beloved show with which the HFPA had to play catch-up. Ironically, Rhys was the odds-on favorite to win Best Drama Actor, but the Globes went with a hot star, Richard Madden, from a hot new show, “Bodyguard.”

Now that “The Americans” has broken this series-acting win streak, the next question is, when will neither drama series nor comedy/musical series winner carry an acting award? The last time that happened was in 2010, when “Mad Men” and “Glee” prevailed but lost all their acting bids.