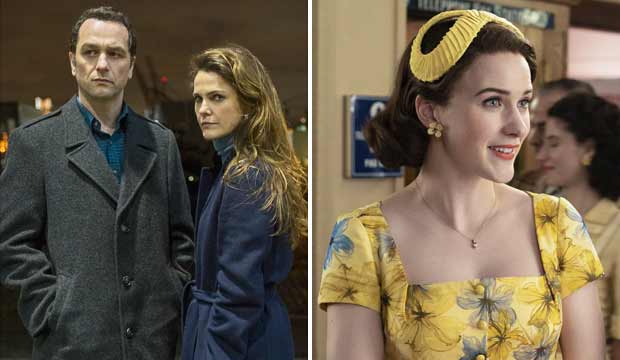 The Critics’ Choice Awards didn’t give too much TV airtime to their TV winners, many of whom were announced in quick succession in the middle of the show while the winners expressed surprise in their seats. But when all was said and done the awards looked a lot like a hybrid of the most recent Emmys and last week’s Golden Globes. “The Americans” and “The Marvelous Mrs. Maisel” were the big winners with three awards apiece. Check out the complete list of winners in all film and TV categories here.

“The Americans” just won the Golden Globe for Best Drama Series, and before that it won the Emmy last September for lead actor Matthew Rhys. It claimed those prizes at Critics’ Choice as well, and added a third victory: Noah Emmerich for Best Drama Supporting Actor. But while the Emmys and Golden Globes were late to the “Americans” party, the critics have always had their backs. This was actually its second Critics’ Choice victory for Best Drama, following its win in 2015 — before everyone else jumped on the bandwagon.

“The Marvelous Mrs. Maisel” won three of its four awards, all in categories it had claimed at the Emmys: Best Comedy Series and Best Comedy Actress (Rachel Brosnahan) for the second year in a row, plus a first-time victory for Best Comedy Supporting Actress (Alex Borstein). It seems that Brosnahan just can’t lose on the awards circuit. She now has an Emmy, a Television Critics Association Award, two Golden Globes and two Critics’ Choice Awards without any losses. Yes, she did lose an Emmy for Best Drama Guest Actress in 2015, but that was for “House of Cards.” She’s batting a thousand for “Maisel,” and she’s got the SAG Awards up next.

Who else won when prizes were handed out? Find out here, and join the discussion on this and more with your fellow TV fans in our forums.