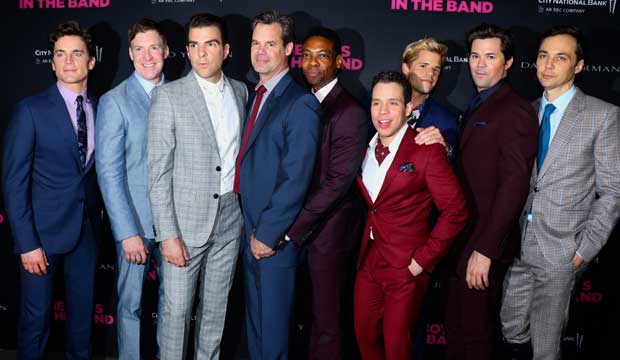 Emmy-winning television mastermind Ryan Murphy recently announced that he is set to turn one of this year’s potential Tony contenders, “The Boys in the Band,” into a movie for Netflix. The stage production (which Murphy produced) ran a successful limited run on Broadway last summer. As the nominations announcement approaches, what could this mean for its chances in Best Play Revival?

“The Boys in the Band” centers on a group of gay men who gather in an NYC apartment for a friend’s birthday party. After the drinks are poured and the music is turned up the fault lines beneath their friendships are exposed, as well as the self-inflicted heartache that threatens their solidarity. When Mart Crowley’s play originally premiered Off-Broadway in 1968, it helped spark a revolution by putting gay men’s lives onstage unapologetically and without judgement in a world that was not yet willing to fully accept them.

“The Boys in the Band” was previously brought to the big screen in 1970 with the original stage cast reprising their roles: Kenneth Nelson as Michael, Leonard Frey as Harold, Frederick Combs as Donald, Cliff Gorman as Emory, Reuben Greene as Bernard, Robert La Tourneaux as Cowboy, Laurence Luckinbill as Hank, Keith Prentice as Larry and Peter White as Alan McCarthy. The film was directed by William Friedkin, just two years before winning the Oscar for directing 1971’s “The French Connection.”

The entire cast of the most recent Broadway premiere will also be reprising their roles for the Netflix film: Jim Parsons as Michael, Zachary Quinto as Harold, Matt Bomer as Donald, Charlie Carver as Cowboy, Robin De Jesús as Emory, Brian Hutchison as Alan, Andrew Rannells as Larry, Michael Benjamin Washington as Bernard and Tuc Watkins as Hank. The director of the production, Joe Mantello, will also assume directorial duties for the new film.

As of this writing “The Boys in the Band” isn’t expected to receive any Tony nominations out of the categories we’re forecasting in our official predictions. Rannells is one of the show’s best chances for a bid, ranked sixth with 12/1 odds for Best Featured Actor in a Play. For Best Play Revival, the production is currently ranked sixth with 9/1 odds above “Torch Song” (25/1 odds).

But might we be underestimating “The Boys”? The show was received well by critics, and while theater critics aren’t members of the Tonys nominating committee, it’s still important to take note of a show’s overall reception when making your predictions since Tony voters will likely be doing the same. An impending Ryan Murphy adaptation doesn’t hurt.

PREDICTTony Awards nominations now and change them till April 30