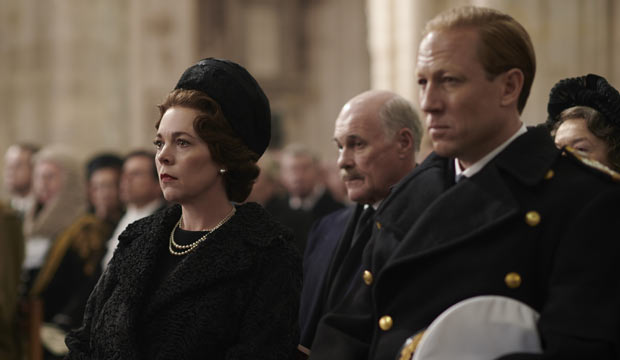 It has been almost two years since the second season of “The Crown” streamed on Netflix (it dropped in December 2017). So has the prolonged absence made critics’ hearts grow even fonder than they already were for the royal drama series, which is back for season three on November 17?

As of this writing “The Crown” has a MetaCritic score of 84 for its third season based on 18 reviews counted thus far, all of which are classified as positive and three of which are rated as a perfect 100. Rotten Tomatoes rates the third season 92% fresh based on 37 reviews, only three of which are rotten. The RT critics’ consensus says, “Olivia Colman shines, but as ‘The Crown’ marches on in reliably luxurious fashion through time it finds space for the characters around her, providing ample opportunity for the appealing ensemble to gleam too.” MC rates reviews on a sliding scale from 0-100, while RT categorizes reviews simply on a pass/fail basis, but both aggregators indicate overwhelming support for the new episodes.

Indeed, the performances are getting the highest marks. Recent Oscar “Favourite” Colman is “a joy to watch” as the new Elizabeth II (the role was played by Claire Foy in seasons one and two). She’s joined by Tobias Menzies (replacing Matt Smith as Prince Philip) and Helena Bonham Carter (replacing Vanessa Kirby as Princess Margaret), and they’re all “magnificent,” “astounding,” “steady” and “nuanced.” The show also remains “gorgeously photographed” and “immensely satisfying” with strong production values.

But a few less enthusiastic reviews argue that the central monarch takes too much of a backseat this season and “explorations of Elizabeth’s feelings are non-existent,” while the more “subdued relationships” between the royal family take away some of the “urgency that previously made the Netflix series so engaging.” On balance, though, the queen still enjoys high approval ratings from her loyal subjects. Check out some of the reviews below, and discuss this and more with your fellow TV fans in our forums.

Jen Chaney (Vulture): “It is still gorgeously photographed, still committed to shining a new light on royal history, and still immensely satisfying to watch. It is also still extremely well-acted … [The royal family] are now played by recent Oscar winner Olivia Colman, Tobias Menzies of, among other things, ‘Outlander’ and ‘Game of Thrones,’ and Helena Bonham Carter. As you might expect, every single one of them is magnificent.”

Caroline Framke (Variety): “The show remains itself, with its signature luxurious production design, dramatic centered shots and extremely on-the-nose dialogue that reads like posh royal fanfic more often than not … Without these steady, nuanced performances, ‘The Crown’ could easily droop under the weight of its own ambition and others’ expectations. With them, ‘The Crown’ becomes as compelling a portrait of how power warps individuals.”

Ann Donahue (IndieWire): “I want to explore Elizabeth’s feelings, and explorations of Elizabeth’s feelings are nearly non-existent in season 3 of ‘The Crown’ … What saves the show — and, indeed, what always saves ‘The Crown,’ year after year — is the astounding performances and production values. Colman is, as she always is, a joy to watch, all sparky charisma … giving texture and nuance to her character in a way that isn’t written on the page.”

Alexis Ong (Slant): “Season three of ‘The Crown’ lacks the urgency that previously made the Netflix series so engaging. This is partly due to the more subdued relationships between the older members of the House of Windsor … ‘The Crown’ presents a network of relationships that are more meaningfully connected by ringing telephones, newspaper headlines, letters, and electric buzzers than face-to-face communication.”