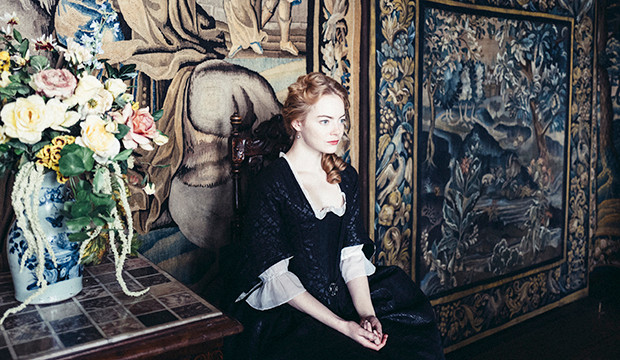 “The Favourite” is not your typical costume drama because Yorgos Lanthimos is not your typical director. His off-kilter, singular style trickles down into every department of filmmaking and Fiona Crombie’s intricate production design is no different. Right from reading the script, Crombie says she knew there was something particular about the story she was helping to create. “I’m old friends with Tony McNamara, [co-writer with Deborah Davis]. I designed a play of his some years before. The minute I started reading the script, I knew it was Tony’s. He’s just got a wit, I recognized it. So right from the off, I knew there was something special.” (The play they did together was “The Great,” about Catherine the Great, which is soon to be adapted for television.)

The wit and playfulness distilled in McNamara’s script for “The Favourite” influenced Crombie’s work as a production designer but she had to be mindful of historical accuracy. It is a period drama based on actual events, after all, no matter how loosely. “We had to create our own language and our own set of rules and we instinctively did that. That was lead by all of the anachronisms on the page. There’s always historical advisors – bless them – and you get these pages from them saying ‘they would never have said that, this didn’t exist.’ Even in films where you’re trying to be really accurate, you always get those notes. The decision is: at what point do you just turn your back on that? It was a combination of accuracy and playing.”

This, Crombie says, resulted in a subtly stylised look where “there’s a lot going on in those frames but it’s not so busy that your eye is roaming like crazy. It’s not too crowded with information.” What Crombie wanted to do was reflect each character’s journey in the sets, such as Emma Stone’s Abigail. “We created this character story for Abigail that as the story progressed and she was increasing in influence and comfort within the palace, she suddenly had glassware in her room, she suddenly had trinkets. Basically, she was feathering her nest. So there are very subtle shifts in her room that emulate what was going on upstairs.”

It’s these sort of iceberg-details (wherein the work is there but it may not necessarily be seen) that helped to create a palace that seemed just that – like a real palace. “I really believe in setting a world for performance. I want the actors to walk in and see the shoes under the bed and the bits and pieces, the things that give a space history and story and life and context. If I can do that then I feel like I’ve done my job properly.”

It’s not a job without its troubles. A set full of rabbits, in particular, was bound to stir up a few issues. “We created this idea that the rabbits were like dolls, so the Queen had little accessories like tiny silver jugs to fill up water bowls and lots of miniature things like that. But introducing wheatgrass into the diet of a rabbit that hadn’t had it before was not a great thing. There were a few accidents,” laughs Crombie.

To date, Crombie’s work on “The Favourite” has resulted in a BIFA win, an Art Directors’ Guild nomination and a BAFTA nomination, with an expected Oscar nomination to come.