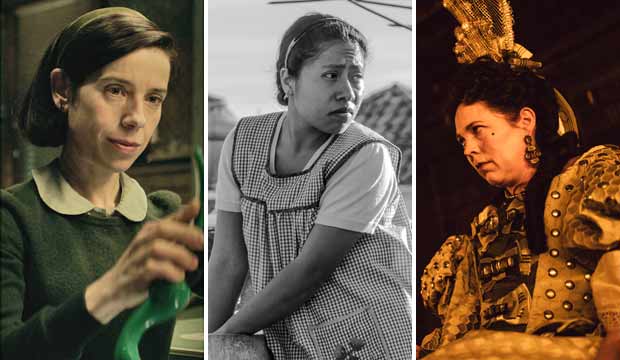 It’s no secret that women are underrepresented in front of and behind the camera in Hollywood, so while there have been a number of Oscar winners for Best Picture featuring female leads, it’s much rarer to find films that are told from a strictly female point of view without a male co-lead. And it’s unheard of for two such movies to win consecutively. But “The Shape of Water” (2017) was one such female-driven winner — unless you count the mute fish man as an equal co-lead, which I don’t. And now this year’s two most nominated films, “Roma” and “The Favourite,” are well positioned for a win with nary a male lead in sight.

It’s actually shocking how rare it is to find a Best Picture winner that isn’t at least partially about a man or group of men. There were “All About Eve” (1950) and “The Silence of the Lambs” (Anthony Hopkins won an Oscar as a lead in 1991, but he has a fraction of Jodie Foster‘s screentime), plus a few other films that fall into grey areas.

For instance, Clark Gable was nominated for an Oscar as a lead in “Gone with the Wind” (1939) but the film was far more concerned with Vivien Leigh as Scarlett O’Hara. Leonardo DiCaprio was pushed as a lead actor in “Titanic” (1997), but given how the story is structured around Rose (played by both Kate Winslet and Gloria Stuart), DiCaprio plays a borderline supporting role. And for “Chicago” (2002) it depends on how important you think Billy Flynn is relative to POV character Roxy Hart and her chief rival Velma Kelly.

Then there were Best Picture winners that were ostensibly about women, but as seen through the eyes of men like “Annie Hall” (1977), “Shakespeare in Love” (1998) and “Million Dollar Baby” (2004).

It’s much, much easier to find Best Picture winners about men where women are marginal. In fact, it’s hard to avoid them. From 2006 to 2016 every single Oscar winner was dominated by male characters. The most prominent female role in any of those films was Berenice Bejo in “The Artist” (2011), who was nominated for Best Supporting Actress but was arguably a co-lead alongside Best Actor champ Jean Dujardin.

Of course, even when the films are about women, like “The Shape of Water,” “Roma” and “The Favourite,” they’re still overwhelmingly directed by men. The only woman who has ever won Best Director (Kathryn Bigelow for “The Hurt Locker,” 2009) did so with a combat film populated almost exclusively by male characters. What Oscars have never seen in their entire 91-year history is a Best Picture winner by women and about women.