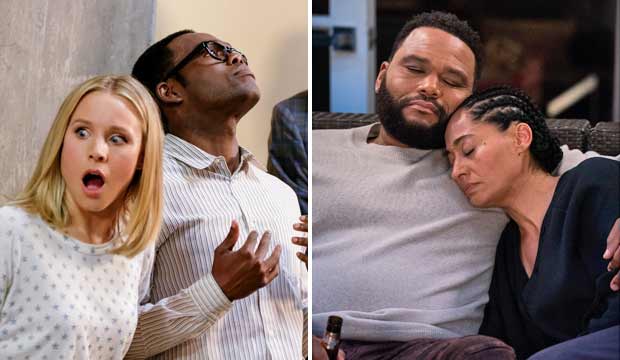 Cable TV and streaming services have been encroaching on the broadcast networks’ territory at the Emmys for years, but the nets have always kept a foothold in the Best Comedy Series race, where there has always been at least one broadcast sitcom in the lineup. Will this be the first year the networks are completely shut out? Not if “The Good Place” and “Black-ish” have anything to say about it.

According to our latest racetrack odds, which are calculated based on the combined predictions of more than 2,000 Gold Derby users (make or update your own predictions right here), there are 8 cable or streaming shows among the top 10 Emmy contenders for Best Comedy Series this year. HBO is represented by “Veep” and “Barry.” Amazon has reigning champ “The Marvelous Mrs. Maisel.” Netflix could make the cut with “The Kominsky Method,” “GLOW,” “Russian Doll” and “Unbreakable Kimmy Schmidt.” And Pop is hoping for its first ever nomination for “Schitt’s Creek.”

That leaves only NBC’s “Good Place” and ABC’s “Black-ish” representing the broadcast networks at the top of our odds. But we think one of them will make the cut. There are seven Emmy slots up for grabs, and we currently rank “Good Place” sixth with 17/2 odds. “Black-ish” trails in eighth place with 16/1 odds, but Emmy rules allow for more than seven nominees if any other shows are within 2% of the vote total of the seventh-place show. That resulted in eight nominees just last year. In fact, the 2% rule allows for as many as nine nominees in the category, but no more than that.

It’s possible we’re underestimating other network shows. CBS’s “The Big Bang Theory” is ending its run this year and could get swept back into the race for the first time since 2014 on a wave of farewell sentiment. NBC’s “Will and Grace” is a past winner in the top category and is still going strong since returning to TV. And “Brooklyn Nine-Nine” got a surge of goodwill after NBC rescued it following FOX’s cancellation.

What do you think? Can broadcast shows hold on for at least one more year?