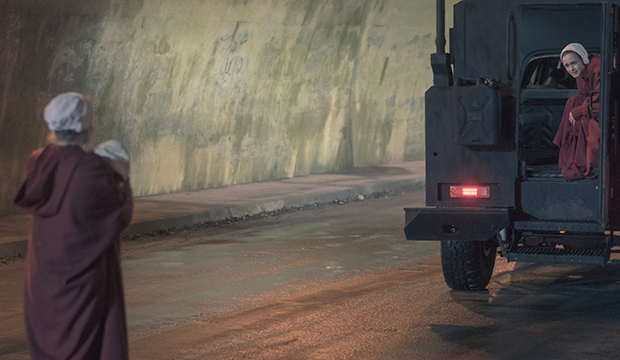 Just when we thought they were out, they pull themselves back in. With Season 3 scheduled to premiere on June 5, “The Handmaid’s Tale” was set to miss this year’s Emmy cycle, the eligibility period of which ends May 31. Sure, the show had three episodes from Season 2 eligible from last summer, but our initial intel last month was that Hulu wasn’t going to campaign those three hours so as to not confuse voters. But, as Gold Derby exclusively revealed Monday — not an April Fools’ joke — Hulu has had a change of heart and will submit those three episodes in 18 episode-specific categories.

“The Handmaid’s Tale” is taking advantage of an arcane rule that stipulates that “orphaned episodes” of a previously eligible series that don’t meet the six-episode minimum requirement to compete in a series race or a body-of-work category (e.g. lead and supporting acting races) can enter in categories that recognize individual episodes. A majority of the 18 is below-the-line categories, along with drama guest actress (Cherry Jones for playing the titular “Holly,” June’s [Elisabeth Moss] mother) and drama guest actor (Bradley Whitford for playing Commander Joseph Lawrence in “Postpartum”), and drama writing and directing — the latter two of which are the only ones that will be presented at the main Emmy ceremony.

SEE Surprise! ‘The Handmaid’s Tale’ will compete in 18 categories at 2019 Emmys [EXCLUSIVE]

Whether this rule should exist is a different discussion altogether, but is this a good move by Hulu to go after these nominations? On the one hand, it keeps “The Handmaid’s Tale” in the Emmy conversation, and you can’t really blame anyone for wanting to collect more hardware via a totally legit rule. The drama field is also lacking a lot of big-name contenders and former nominees, so it can benefit from a name-check. Plus, the show is actually competitive for wins in several categories, especially with the brilliant “Holly.”

But the whole thing also reeks of thirst. You can argue that Hulu should just let these three episodes go and focus on Season 3 next year. Season 3 — on which Whitford is a series regular — will also be airing while Emmy voting is going on, so some voters might be completely flummoxed as why a couple of Season 2 episodes are on the ballot, but the show and Elisabeth Moss are not. On top of that, the Season 2 finale, one of the three leftovers, was highly polarizing, and Season 2 itself kind of crashed and burned at last year’s Emmys; it only won three awards from 20 nominations and was blanked at the main ceremony after taking home eight statuettes in 2017.