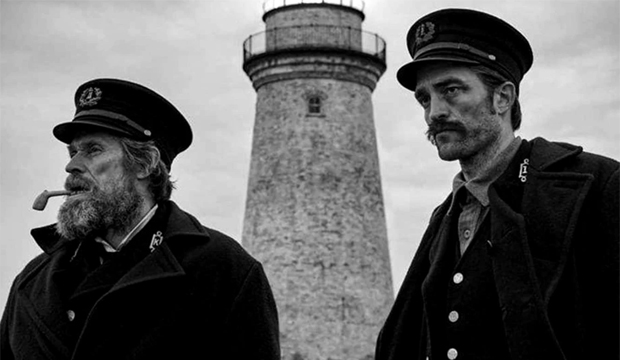 Robert Egger‘s “The Lighthouse,” which screened as part of the BFI London Film Festival, was hailed by the critics.  This black-and-white picture is an intense psychological study of two men — Robert Pattinson and Willem Dafoe — working as lighthouse keepers in the 1890s. Eggers, who wrote and directed the 2015 thriller “The Witch,” pulled double duty on this film as well, with his brother, Max Eggers, as co-writer. The film, which debuted in Cannes, will be released stateside by A24 on Oct. 18.

Owen Gleiberman (Variety) observes that the film “is made with extraordinary skill and says that “both actors are sensational (and they work together like one).” However, he notes “in terms of sheer showboating power it’s Dafoe’s movie.” As he explains, “Dafoe plays Thomas Wake, the aging ‘wickie,’ as a knowing piece of kitsch — a crusty, bearded, limping old seaman with his pipe held upside-down and a brogue marinated in gin. Yet Dafoe digs so deep into this walking cliché that he transforms him, before our eyes, into an intricate and layered character.”

Turning to Pattinson, who “gives an intensely physical performance,” Gleiberman says that “the way ‘The Lighthouse’ works, Willem Dafoe’s performance is a kind of taunt, and Pattinson, on the receiving end of it, rises to the occasion — when he spits out a speech about how sick he is of listening to the old man, it’s the most ferocious acting of Pattinson’s career.”

in his five-star review, Peter Bradshaw (The Guardian) observes,”‘The Lighthouse’ keeps hold of us with the sheer muscular intelligence and even theatricality of the performances and the first-class writing. Even Sir Donald Wolfit or Robert Newton could not have got more out of the role of Tom than Willem Dafoe does and Pattinson is mesmeric in his bewilderment and uncertainty.” Summing up, he says: “very few films can make you scared and excited at the same time. Just like the lighthouse beam, this is dazzling and dangerous.”

Brian Tallerico (RogerEbert.com), however, has a greyer view of the black-and-white film: “While it’s ultimately a bit too self-conscious to provoke the existential dread and true terror of the best films like it, it’s still an impressive accomplishment thanks to Eggers’ fearlessness and a pair of completely committed performances.” Speaking of those, Tallerico praises Dafoe’s ventures into “salty dog caricature.” He’s more appreciative of Pattinson: “Pattinson is even better. In a long line of daring performances recently (2017’s “The Lost City of Z,” 2019’s“High Life”), this may be his best work.”