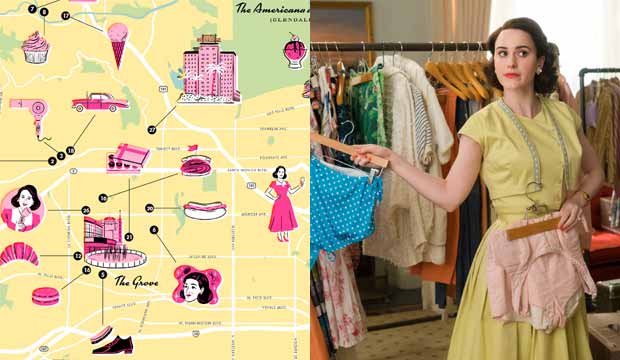 Television academy members start marking their ballots for this year’s Emmy winners on Thursday, August 15, and if voters in the Los Angeles area want to make a day of it, they can enjoy steep discounts around the city courtesy of the Amazon series. A number of businesses will be offering their goods and services at 1959 prices on that day only. You can bring your wallet — or better yet, your coin purse — to these venues.

Among the beauty services on offer on Thursday are $2.00 manicures, a $2.00 “Maisel”-inspired makeover, and a $3.00 haircut. Then you can enjoy a deli sandwich for 99 cents; a cupcake, macaroon and scoop of ice cream for a quarter apiece; and a burger and fries for 50 cents. Round things out with a 51-cent movie ticket, an improv performance for a buck, and a fill-up on gas for 30 cents per gallon — something tells me the lines for that one might be especially long.

All of this is to keep “Mrs. Maisel” foremost in mind for Emmy voters. The series earned 20 nominations, which is up 42% from last year’s haul of 14 nominations. That makes it the year’s most nominated comedy, and it’s second only to “Game of Thrones” for the most nominations for a program in any genre. It’s the reigning champion for Best Comedy Series; it won a total of eight awards in 2018, which set a new record for the most honored comedy in a single season.

And creator Amy Sherman-Palladino by herself won four awards as a writer, director, producer and music supervisor. She’s the only woman ever to win both Best Comedy Writing and Best Comedy Directing. Will she and her show sweep again?