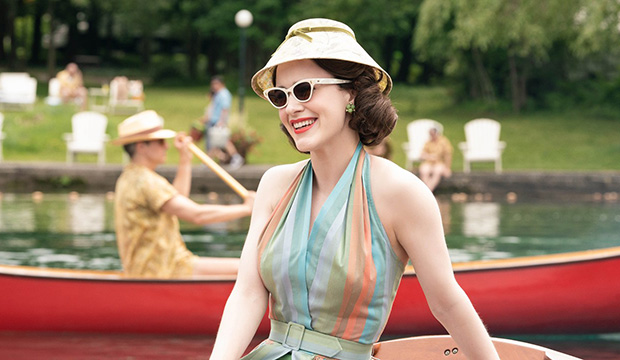 It’s Emmy nomination announcement day on July 16 and I know just what you are thinking — what lipstick goes best with trophy gold? Never fear for Miriam “Midge” Maisel, B. Altman makeup counter-girl supreme, is here to help. Besides, no ’50s lady of means would greet the morning with naked lips, especially if she is a female stand-up comic.

Yes, it’s “The Marvelous Mrs. Maisel,” the Amazon Prime series that set a record for the most Emmys won by a comedy series in a single year with eight for its first season. In the second season, the undercover nightclub joker played with chic aplomb by Rachel Brosnahan takes a day job that requires her to suggest the perfect lipstick for customers at the Revlon counter.

SEE Will ‘The Marvelous Mrs. Maisel’s’ mom get her first career Emmy nomination

For those who could use Midge’s expertise in the 21st century, Revlon has launched The Marvelous Super Lustrous collection. There are two bundles of three lipsticks, one in shades of Take the Stage Reds (Fire & Ice, Certainly Red and, one name-checked on the show, Cherries in the Snow), and the other in hues of Stand-Up Nudes (Pink Truffle, Blushing Mauve and Rum Raisin).

SEE Sterling K. Brown changes venues from ‘This Is Us’ to ‘The Marvelous Mrs. Maisel’

And guess where these limited-edition trios of marvelous lip enhancements can be purchased? Why on Amazon, of course. If you need encouragement, here is what the Revlon press release says: “Midge’s own bold choices are a hallmark of the show and reflect her trailblazing spirit as she finds her own path to independence in the late 1950s and early 1960s.”