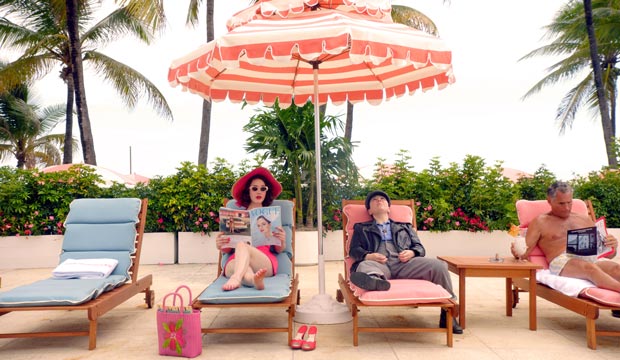 While a premiere date for the third season of Amazon’s “The Marvelous Mrs. Maisel” hasn’t been finalized yet, there is good news as filming is nearing completion. Season 3 production began in March and it should end next month in September, we’re hearing. A new image from the third installment has been unveiled (see above), which features Miriam “Midge” Maisel (Rachel Brosnahan) and Susie Myerson (Alex Borstein) grabbing some sun by the pool. Midge is reading “Vogue” in her pink bathing suit while Susie looks miserable lounging around in her leather coat and black boots. Do you notice any other potential Season 3 spoilers in the first look photo?

Last year “The Marvelous Mrs. Maisel” made TV history by becoming the first streaming show to win Best Comedy Series at the Emmys. Not only that, but “Mrs. Maisel” ran off with eight total Emmys, a record for a comedy, including Best Actress for Brosnahan, Best Supporting Actress for Borstein and both Best Writing and Directing for creator Amy Sherman-Palladino. In all, the first two seasons of the hour-long comedy have taken home three Golden Globes, five Critics’ Choice Awards, two PGA Awards, a WGA Award and a Peabody Award.

For the 2019 Emmys the show received a whopping 20 nominations, putting it behind only “Game of Thrones,” which earned a historic 32 bids, as the year’s most recognized program. Many of Gold Derby’s Experts, Editors and Users are predicting “The Marvelous Mrs. Maisel” to win Best Comedy Series yet again, though it’ll have tough competition from the final season of “Veep.”

Besides Brosnahan and Borstein, five other cast members are nominated for their work in Season 2: supporting players Tony Shalhoub and Marin Hinkle and guest stars Luke Kirby, Rufus Sewell and Jane Lynch. Sherman-Palladino and producer Daniel Palladino are both nominated for directing individual episodes.

Season 1 of “The Marvelous Mrs. Maisel” streamed in November 2017 while Season 2 debuted December 2018. If we had to make an educated case, then Season 3 will likely premiere around those same months in 2019 so that it’ll be eligible at kudos like the Golden Globes, Critics’ Choice and SAG Awards.