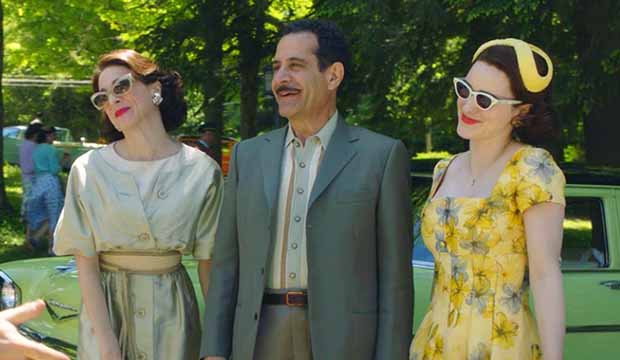 On the first season of Amazon’s comedy series, “The Marvelous Mrs. Maisel,” the popular show about an Upper West Side ‘50s housewife who pursues a secret career as a stand-up comic,  star Rachel Brosnahan as Midge and her supporting sidekick, Alex Borstein as manager Susie, took home the show’s lone acting Emmys. They both have a chance to repeat their wins this year.  Joining them again is guest actress Jane Lynch as rival comic Sophie Lennon, who was also in the running last year and has an even better chance at a gold token, according to the combined Gold Derby odds. Also in the ladies club this time is Marin Hinkle, getting her first Emmy nod ever as Midge’s mom.

But the men in the Season 2 cast aren’t exactly chopped liver, either. Not only did Luke Kirby get recognized as a guest actor for his thoughtful performance of real-life jokester Lenny Bruce, who is a far cry from Dustin Hoffman’s late-life self-destructive version in the in 1974 biopic “Lenny.” He is joined by Rufus Sewell in the same category for his flirtatious artist who introduces Brosnahan’s Midge to the burgeoning New York art scene.

SEE‘Mrs. Maisel’s’ mom Marin Hinkle talks about her escape to Paris and the Catskills {EXCLUSIVE VIDEO]

However, the first male cast member most likely to pocket a trophy is supporting player Tony Shalhoub, as Midge’s papa, Abe Weissman. His journey so far mimics that of his daughter, whose life turned upside down after her husband left her. Abe, affected by his daughter’s change of marital status, similarly undergoes a transformation both personally and professionally as he quits both his jobs as a researcher at Bell Labs and as a math professor at Columbia University. He also discovers Midge’s stand-up pursuits as he stumbles upon her act at the Concord in the Catskills  as he scowls as she tells bawdy jokes about her parents’ sex life.

The actor’s submitted episode is “We’re Going to the Catskills,” which revels in Abe’s obsessive-compulsive behavior that in some ways isn’t that much different from his super-smart OCD-suffering detective character on ABC’s “Monk.” This patriarch clings to traditions like a barnacle on a barge. When the Weissmans arrive at their usual summer resort, Abe immediately demands and downs his usual drink, a glass of tomato juice, with a stalk of celery and a lemon slice, and insists that keeping them coming.

SEE Sterling K. Brown changes venues from ‘This Is Us’ to ‘The Marvelous Mrs. Maisel’

Shalhoub earned an Emmy nomination for each of “Monk’s” eight seasons – winning three times – so it is a delight to see him act controlling and persnickety in a different environment. The actor’s funniest and most Abe-like moment arrives when he warns his daughter’s estranged husband, Joel (Michael Zegen), who will be sleeping in the sunroom of their rental house, about his pre-dawn ritual that involves his special “outdoor calisthenics.” That includes wearing a special one-piece romper that is quite form-fitting.

As promised, Abe goes to the dock by the water and performs jumping jacks, squats and push-ups to the sounds of actor Robert Preston singing “Chicken Fat,” a 1962 ode to working out that was written by composer Meredith Wilson (“The Music Man”) and was commissioned by the President’s Council on Physical Fitness. Anyone who was around at that time couldn’t avoid the song. However, Abe’s dedication to such routines will start to crumble by the end of the season.

Last year, Shalhoub lost to Henry “the Fonz” Winkler, who won his first-ever Emmy for his acting coach on HBO’s “Barry.” And. for a while, Alan Arkin of Netflix’s “The Kominsky Method”  – who has been up for a TV trophy four times previously but has never won – was ahead in the combined odds. But the tide has definitely shifted in Shalhoub’s favor recently, with 921 predictors putting him at No. 1, with Arkin next with 259 and Winkler at in third with 215. The fact that “The Marvelous Mrs. Maisel” is the comedy series with the most nominations at 20 doesn’t hurt, either. Let’s just hope they make sure his trophy is germ-free before handing it to him.