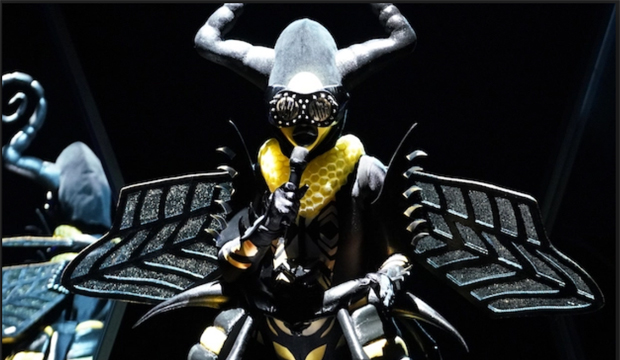 The votes are in! In our recent poll that asked for YOUR final guesses for who’s hiding inside the Bee costume on Fox’s reality TV show “The Masked Singer,” a whopping 70% said Gladys Knight. She’s long been the pick of judge Robin Thicke, but of course, not all of the panelists are on board. Rounding out our poll results, 12% said Patti LaBelle is actually the Bee while 18% said it’s someone else entirely. Find out Bee’s true identity when the two-hour season finale of “The Masked Singer” airs Wednesday, February 27 at 8/7c.

In last week’s semi-finals episode, Bee performed Aretha Franklin‘s “(You Make Me Feel Like) A Natural Woman” and was voted into the top three along with Monster and Peacock. Robin once again proclaimed that he thought Gladys was wearing the Bee mask, and he was backed up this time by guest panelist Kenan Thompson, who bragged, “I know exactly who that is 1000%. Who in their right mind doesn’t know that’s Gladys Knight? [Her voice] is a gift. It’s a beautiful thing.”

However, Ken Jeong, Nicole Scherzinger and Jenny McCarthy weren’t as confident as Robin and Kenan. Ken noted, “On this show there have been several times that we’re, ‘[It’s] definitely this person.’ It could be someone who is also singing like Gladys Knight inside the mask. Patti LaBelle [could be] singing like Gladys.” Nicole also voted for Patti, while Jenny instructed them all to “have an open mind” when it came to Bee.

Here’s what some of our savvy readers had to say about Bee’s true identity:

Casey: You should all be ashamed. It’s TINA!! She even sang her own song and you don’t get it. That’s sad, She is an icon and everyone is missing it!

S: I think the bee is Chaka Khan. Chaka Khan been singing since she was really young. She the only grammy artist that has 10 grammys next to Taylor Swift and Bonnie Rait.

Melissa Tisdale: I believe that the bee is Tina Turner. I am a huge Tina fan, and I know that is has to be my idol!

Jackie: It’s Jenifer Lewis from “Blackish.” Watch what I say! Her mannerisms and sassy attitude gave her away.

Andrew: Originally I thought the Bee was Diana Ross, but the last few weeks the clues have definitely pointed to Knight. I mean, the peach pie last week? Knight is from Georgia.

Kevin Borden: The bee is Gladys Knight…. Tina Tuner is home sick in Switzerland and Patti does not move like that.