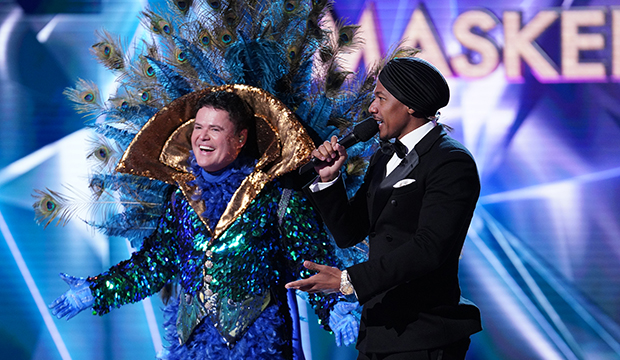 Donny Osmond is mad as hell and he’s not going to take it anymore. Not that he lost “The Masked Singer” — but that his sister Marie spoiled that he was Peacock.

“Don’t even bring Marie’s name up!” he told “Entertainment Tonight” with a laugh (watch below). “I was so mad. [That’s] the last time I’m going to trust Marie with a secret. To her defense, she was trying to be funny.”

Asked what mask Marie might wear on the show, Donny quipped, “Monster!”

During an interview with “Access Live” in January, Marie was grilled about her bro possibly being the feathered crooner on the Fox hit. One of Peacock’s clues was that he started performing at 5 years old, and Marie confirmed that they started when she was 3 and he was 5. “I told him, ‘Why are you giving away such easy clues?'” she said, before trying to walk it back. “I don’t know. But I know we started at NBC, which was the peacock.”

Too late. But to be fair, speculation was already rampant that Donny was Peacock; Marie just accidentally confirmed what we all knew.

Donny, who finished in second place to Monster, aka T-Pain, let Marie in on his secret identity because of their eponymous Las Vegas show; he flew back to Sin City every night from Los Angeles, where “The Masked Singer” is filmed, to perform with his sis.

The singer didn’t reveal his masked identity to everyone in his family though. His 6-year-old grandson, Truman, suspected that Peacock might be grandpa, but Donny kept him in the dark. “He calls me and says, ‘Grandpa, I love the Peacock, but he sounds so much like you!'” he shared. “I felt so bad, because I couldn’t tell him. He says, ‘Grandpa, I think it’s you.’ I said, ‘We’ll find out! I don’t think so.’ I don’t think he’s going to trust me the rest of his life!”