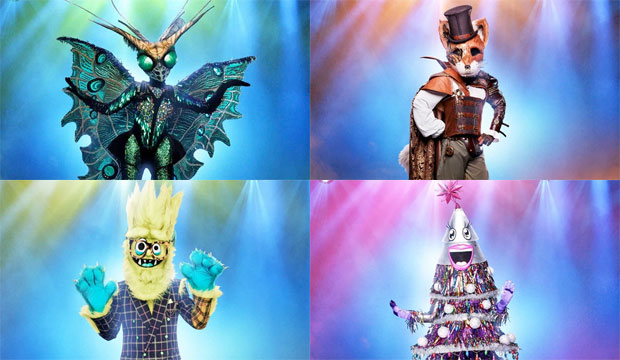 With only seven costumed characters still in the running to win Season 2 of “The Masked Singer,” four took the stage on Wednesday (Butterfly, Fox, Thingamajig, Tree) with the other three set to return next week (Flamingo, Leopard, Rottweiler). Panelists Ken Jeong, Jenny McCarthy, Nicole Scherzinger and Robin Thicke and host Nick Cannon once against tried to guess the celebs’ true identities in this wild and wacky reality TV show. By the end of the dazzling hour, one singer was forced to unmask in front of America.

SEEPatti LaBelle (‘The Masked Singer’ Flower) interview on shocking elimination: ‘There are voices more beautiful than mine’ [WATCH]

Below, check out our minute-by-minute “The Masked Singer” recap of Season 2, Episode 10, titled “Clash of the Masks,” to find out what happened Wednesday, December 4 at 8/7c. Then be sure to sound off in the comments section about your favorite costumed celebs on Fox’s reality TV show, who impresses you the most, and who you think will ultimately win. Keep refreshing/reloading this live blog for the most recent updates.

8:00 p.m. — “Previously on ‘The Masked Singer’!” In the ninth episode, Flower lost the audience vote against Rottweiler and was forced to compete in a smackdown. That’s where she went head-to-head against Leopard, with the panelists choosing to eliminate Flower from the competition. Flower removed her mask to reveal Patti LaBelle, surprising absolutely no one. “There are voices more beautiful than mine,” LaBelle said in her post-show interview. Who will become the next masked singer to face the music tonight?

8:10 p.m. — Tonight’s first Face Off will be Butterfly taking on Fox. Butterfly is intimidated to be singing against some of the best vocalists remaining in the competition, but she’s used to sharing the stage with giants. She feels stronger than she’s ever been before and we see a playbill that hints she’s been on Broadway. Butterfly is singing “Sorry Not Sorry” by Demi Lovato. She’s having fun on stage tonight but there’s no slacking in the vocal category. Butterfly is pitch perfect as she shows off her powerful range and raspy tone. Following the performance the panel throws out a few guesses as to who Butterfly is including Michelle Williams from Destiny’s Child, Leona Lewis, Monica and Kerri Washington.

8:20 p.m. — It’s Fox’s turn to take the stage and he reveals he’s often felt underestimated in his career. We see him playing piano out in a field with a bunch of creepy guys dressed in white running around him. He calls himself a true blue superhero and tonight he’s stripping things down with a performance of “Tennessee Whiskey” by Chris Stapleton. This is a more soulful, gentle side of Fox and he’s got the chops to pull off the ballad. He’s also got an incredible falsetto and if he’s not a professional singer it’s definitely something he does often! That was great. The panel thinks Fox could be AJ McLean from Backstreet Boys, Jamie Foxx or Taye Diggs.

8:25 p.m. — The votes are in and the winner of tonight’s first Face Off is Fox! Butterfly seems upset about her loss, but she needs to dust herself off and get ready for the Smack Down later.

8:35 p.m. — The second Face Off of the evening is Thingamajig vs. Tree. Thingamajig is his own #1 and isn’t ready to commit to anyone else. He’s recently suffered a setback but this show has helped get him back on his feet. We see a reference to the state of Maryland. Tonight Thingamajig is singing “Haven’t Met You Yet” by Michael Buble. He sounds completely different tonight! He’s still on point, but this might be my least favorite performance from him ever – but considering he’s probably my favorite contestant that’s not to say it was bad. Some of the panel’s guesses about Thingamajig’s identity include Montell Jordan, Brian McKnight and Dennis Rodman.

8:40 p.m. — It’s Tree’s turn to take the stage and she’s filled with confidence. She references a “smelly cat” and we also see a witch hat and cans of soup. Tonight she’s taking on the 80’s classic “Total Eclipse of the Heart” by Bonnie Tyler. This is a great ballad for Tree to pull out at this stage in the competition and she can SANG! The range she showed at the end of the song were worthy of a Broadway star and I’m convinced that’s a stage she’s been on. The panel believes Tree could be Lisa Kudrow, Ana Gasteyer, Nia Vardalos or Megan Mullally.

8:50 p.m. — The votes are in and the winner of tonight’s second Face Off is Tree! What an upset! Thingamajig has been one of the favorites to win all season but Tree is stepping up her game! Thingamajig will join Butterfly in tonight’s Smack Down.

8:55 p.m. — In the Smack Down Butterfly sings “Believer” by Imagine Dragons. She’s ready to fight tonight and she’s not going down without laying down a few rock vocals. Thingamajig follows that up with “Caught Up” by Usher. This could be a tight vote! After all the votes are counted, the winner of tonight’s Smack Down is Thingamajig!