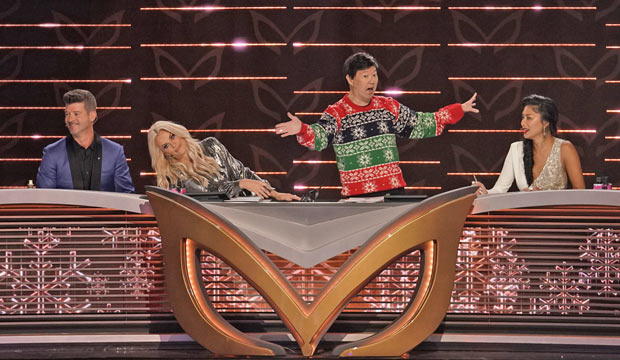 “The Masked Singer” celebrated the holidays in Wednesday’s semi-finals as the final five costumed celebrities — Flamingo, Fox, Leopard, Rottweiler and Thingamajig — sang for a spot in next week’s finale. With two contestants going home in this round, everything was on the line for the contestants as Robin Thicke, Jenny McCarthy, Ken Jeong and Nicole Scherzinger made their wild and wacky guesses. Did the right three singers make it through to the Season 2 finale? And did you correctly predict the identities of the two eliminated celebs?

Below, check out our minute-by-minute “The Masked Singer” recap of Season 2, Episode 12, titled “Two Masks Take It Off: Holiday Semi-Finals,” to find out what happened Wednesday, December 11 at 8/7c. Then be sure to sound off in the comments section about your favorite costumed celebs on Fox’s reality TV show, who impresses you the most, and who you think will ultimately win. Keep refreshing/reloading this live blog for the most recent updates.

8:00 p.m. — “Previously on ‘The Masked Singer’!” In last night’s 11th episode, the Final 6 performed for the regular panelists and reigning champ T-Pain, with Tree receiving the lowest number of votes. Jenny was the only judge who correctly guessed “SNL” vet Ana Gasteyer was hiding behind the Tree mask, while the others picked such names as Amy Sedaris, Bebe Neuwirth and Mariah Carey. “I just peed!” exclaimed McCarthy after getting it right. Which two costumed characters will be unwrapped tonight?

8:10 p.m. — Up first to fight his way to the finals is Fox. Playing a character judged strictly on his voice has been a joy he hasn’t enjoyed in over 20 years. He says he’s not to be slept on as a vocalist and we see the name “Richard” spelled out on the screen after viewing a piano with a candelabra. He calls the mask his “great equalizer” before taking the stage to sing “This Christmas” by Donny Hathaway. Fox has a wonderful, soulful voice and he seems to enjoy performing this holiday jam for the audience. As his hint, Fox unveils a photo of last season’s contestant, Rabbit aka Joey Fatone, who told him he’d have a great time on the show. This led the panel to believe Fox is Jamie Foxx, Wayne Brady or Tyrese.

8:20 p.m. — Up next is Rottweiler who says he’s smiling ear to ear under his mask. We see that he’s got a family and he says although they don’t have a dog now, they may have to get one after this. Rottweiler has become an extended member of their family. Tonight he’s singing “Mr. Brightside” by The Killers and the panel looks truly perplexed and amazed by his vocals at the same time. They can’t figure him out! Each week it becomes more clear to me that this is Chris Daughtry. Rottweiler is rocking the house and the crowd is loving it! As a hint, Rottweiler reveals a Christmas card and says he believes handmade is always better than store bought. Is he an artist? This leads the panel to guess Rottweiler is James Franco, Arnel Pineda or Darren Criss.

8:25 p.m. — It’s Thingamajig’s turn to shoot for the finals and he says he’s enjoying the show after a tough year filled with a lot of adversity. He says his parents came to America with nothing and taught him the key to the American dream was hard work. We see a knee brace and a diploma within his intro package as well. Tonight he’s performing “Winter Wonderland” by Bing Crosby. He’s putting a bit of a reggae spin on this holiday classic but it’s not showing off his voice like some previous performances have. Thingamajig might be in a bit of trouble tonight. As a secret hint, Thingamajig reveals an Indiana Jones hat and a whip. He says although he’s a movie buff, this clue needs a little more “digging.” This leads the panel to predict Victor Oladipo (wow, Ken could be right for once!), Montell Jordan or Dennis Rodman.

8:30 p.m. — Up next is the last woman standing in the competition, Flamingo. She cried hysterically inside her mask when she found out she made the semi-finals. Flamingo loved nothing more than singing in her church choir growing up but it was always just a hobby and she was afraid of failure if she took it any further. We see cupcakes, pancakes, a basketball and some luggage. That’s all pretty random! Tonight Flamingo is singing “Hallelujah” by Jeff Buckley. This is a song that always sends shivers up the spine and Flamingo was wise to choose it. She’s bringing the dramatic flare tonight and soulfully belts out the climax, bringing the audience to their feet. For her secret hint, Flamingo reveals a globe and says she was baptized in Israel. This leads the panel to guess Flamingo is Adrienne Bailon, Sabrina Bryan or Jessica Simpson.

8:40 p.m. — Leopard is last to perform for his spot in the finale and we see images of African dancers in the background of his introductory package. He also mentions that he has children and that the beginning of his long and storied career began with a Nativity play when he was 11 years old. We see brief images of music, a cancelled album and a snowboard. Tonight he’s singing “Big Spender” by Shirley Bassey. As usual Leopard is bringing all the dramatic flare and I love it. This performance is a little jazzy, Broadway and flirtatious all in one. Wisely, Leopard is showing off his range when it counts. This may have been the best vocal of the night. As his secret hint, Leopard reveals blueprints for a dream home where he hopes to live with his new husband, Nick Cannon! It may just reveal he has an interest in architecture. The panel guesses Leopard is Eric Benet, Jeff Goldblum or Seal.

8:50 p.m. — All five performers have sung their hearts out but only three can advance to the finale. The votes are in and the first singer forced to un-mask and be eliminated from the competition is Thingamajig! Poor guy. Will he reveal himself to be Nicole’s future husband? For their final guesses the panel predicts: Jenny – Paul George, Nicole – Markelle Fultz, Robin – Montell Jordan and Ken – Vincent Oladipo. At last, Thingamajig pulls off his mask to reveal Vincent Oladipo! Ken is right!

8:59 p.m. — It’s now time to find out who will be the second performer to un-mask tonight and go home in fourth place. The votes have been counted and the singer forced to reveal themselves is Leopard! Wow! He was great tonight that is surprising. For their final guesses the panel predicts he is: Robin – Seal, Nicole – Seal, Jenny – Eric Benet and Ken – Jeff Goldblum. Now it’s time to find out! Leopard pulls of the mask to reveal he is Seal! That’s a wrap for tonight. Flamingo, Fox and Rottweiler will battle it out in the finale next week.