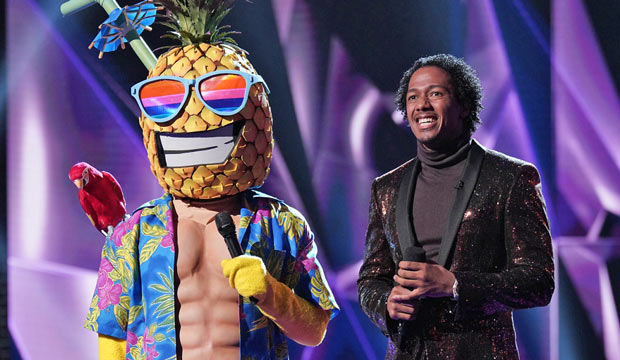 Last week Fox found itself with a reality TV sensation on its hands thanks to “The Masked Singer,” which tasks celebrities with hiding their identities by performing in outrageous costumes. The season premiere nabbed more than nine million viewers and cemented itself as a watercooler bonanza as fans worldwide wondered, “Who’s behind the masks?!” This week six brand new celebs entered the competition dressed up as Rabbit, Alien, Raven, Pineapple, Poodle and Bee. Which contestant lost the singing challenge and had to reveal their true identity in front of America?

WEEK ONE SPOILERS: Who are Deer, Lion, Monster, Peacock, Unicorn

Below, check out our minute-by-minute “The Masked Singer” recap of Season 1, Episode 2, titled “New Masks on the Block,” to find out what happened Wednesday, January 9 at 9/8c. Then be sure to sound off in the comments section about your favorite costumes on Fox’s reality TV show, who impresses you the most, and who you think will ultimately win. Keep refreshing/reloading this live blog for the most recent updates.

9:00 p.m. — “Previously, on ‘The Masked Singer’!” Host Nick Cannon introduced the world to the wildest reality show in years, as six costumed celebs faced off in three head-to-head match-ups: Peacock vs. Hippo, Unicorn vs. Monster and Lion vs. Deer. A panel of judges — Nicole Scherzinger, Jenny McCarthy, Ken Jeong and Robin Thicke — tried to guess who was hiding behind the masks, and at the end of the episode the loser, Hippo, removed his costumed head to reveal Pittsburgh Steelers player Antonio Brown. Who will be unmasked tonight?

9:08 p.m. – The first Face Off tonight is Rabbit vs. Alien. Rabbit is up first and we have a few clues: He’s spent most of his life on stage, but was never alone. Now he “pops up” here and there. Synchronized singing is his forte and he’s been training for this his entire life. Who could it be? It sounds like it’s probably someone from a boy band. He’s singing “Livin’ La Vida Loca” by Ricky Martin. Rabbit is clearly a seasoned performer with a pretty solid voice! JC Chasez from *NSYNC? Or is it someone older?

9:10 p.m. – Robin mentioned Rabbit is in a straight jacket, which makes me CERTAIN it’s JC or another member of *NSYNC because I remember a video of theirs in a mental institution. Am I right or am I right? They also had an album called “Pop.” When asked if he was in a band, he made it clear that he was in a “BAND.” He seemed to emphasize band as if not a boy band, but I’m not sure. Among the panel’s guesses were Criss Angel, Jake Gylllenhaal (come on!), Joey Fatone or another member of *NSYNC.

9:18 p.m. – It’s time to see what Alien can do. Alien seems to be a woman and in her family, being private is an alien idea. She clearly grew up in the limelight, but never felt in control. She’s singing “Hands to Myself” by Selena Gomez and my first wild guess is La Toya Jackson! What do you think? She’s not moving around much, but she is getting up there in age. Perhaps she’s not as much of a dancer at this age.

9:20 p.m. – Let’s see what the panel thinks. Nicole said Alien didn’t sound like a professional singer (the shade!), but Jenny picked up on the comment that Alien doesn’t like being controlled and guessed it may be someone who left a girl group. Robin guessed Bella Hadid, while others mentioned Britney Spears (no way!), Kourtney Kardashian (I can’t see her doing this) or one of the Spice Girls.

9:21 p.m. – The winner of tonight’s first Face Off is: Rabbit! Alien will be in the bottom three and is at risk of being unmasked at the end of the show.

9:28 p.m. – Next up is Raven vs. Pineapple. Pineapple strutted out in beachwear, while the Raven was wearing a cage over its head and seemed a bit goth. Raven’s clues: All his life he listened to other people’s stories and is ready to tell his. He’s always been a sunny person and attention is never something he had trouble getting. Nobody talks more than Raven, but he recently lost someone important. He’s singing “Rainbow” by Kesha, By the vocals, the panel is having a tough time distinguishing if its a woman or man. To me it sounds like a man who is very familiar with Broadway musicals, but not necessarily known for singing. But he (or she?) can sing! Before the clues ended I thought it could be Ross Mathews, but after the vocal performance I doubt it.

9:30 p.m. – Jenny got goosebumps. Jenny asked if Raven has hosted a talk show. When the answer was yes, Jenny guessed Sherri Shepherd was behind the mask. Others thought Sally Jesse Raphael or Starr Jones. What do you think? Maybe Ricki Lake?

9:33 p.m. – Pineapple may look happy now, but he’s gone through some tough times. After beating a life-threatening disease “this OG” is taking it easy. He’s been an entertainer his whole life, but now wants to live his dream of becoming a singer. In the package, he was washing an old, pink car with Michigan plates with a “Pipe Dream” bumper sticker. Hmmm. He’s singing “I Will Survive” by Gloria Gaynor. He’s got a raspy voice, but is actually singing in key. He definitely doesn’t sound like a professional singer and is basically doesn’t move. It was not a very good performance, but he put forth some effort.

9:38 p.m. – The results are in for the second Face Off. Raven has won! Pineapple is in danger of being unmasked at the end of tonight’s episode.

9:41 p.m. – It’s time for Poodle vs. Bee in the final Face Off of the night. This looks like it could be a diva battle! Poodle has loved to be on stage and take on a character ever since she was a little girl. There were references to San Francisco and perhaps stand-up comedy, despite the fact that she’s from a musical family. She’s singing “Heartbreaker” by Pat Benatar. She’s actually got a much better voice than I expected! Is this Margaret Cho? Can Margaret Cho even sing? Hmm, I don’t think so. Something about her voice sounds familiar though.

9:43 p.m. – Poodle was praised for her stage presence and energy. Nicole is guessing someone from the LGBT community. Jenny guessed Ali Wong or Richard Simmons haha. As another clue, Poodle said she was there “for their honor,” to which Ken guessed Ruth Bader Ginsburg. Robin thinks it may be RuPaul (absolutely not!).

9:48 p.m. – It’s now time for Bee to sting or be stung. Bee has had a long a career and flown to soaring heights. Being a worker bee has kept her young and she’s looking forward to singing to a new generation. She’s ready to create a buzz, even behind a mask. Singing “Chandalier” by Sia, Bee is serious about her vocals while still making me laugh for some reason. Before she started singing I was thinking Lil’ Kim, but that Queen B can’t sing like this. She almost sounds like Gladys Knight, but Bee is way too tiny.

9:50 p.m. – Nicole thinks Bee is a seasoned professional and I agree. Jenny noticed a clue about being an Empress. Robin guessed Diana Ross, who it is clearly NOT. Bee admitted she started singing in the 1950’s. Someone yelled out Dionne Warwick, which I know for a FACT it is not. Actually now that Jenny brought up the “Empress” bit, I’m convinced it’s Gladys Knight, who has also been called the Empress of Soul!

9:51 p.m. – The winner of the final Face Off is Bee! That means Poodle is in the bottom three with Alien and Pineapple.

9:59 p.m. – Who is about to be unmasked? The results are in and tonight’s unmasked singer is: Pineapple! Poodle and Alien will live to sing another day. Final guesses? Sugar Ray Leonard, Cheech or Chong, Jimmy Buffett or Kid Rock. After the reveal, it was in fact Tommy Chong! Jenny took credit for that being one of her guesses. Who will be unmasked next week? Tune in on Wednesdays to find out! What a fun, absurd spectacle! Tell us all your guesses in the comments!