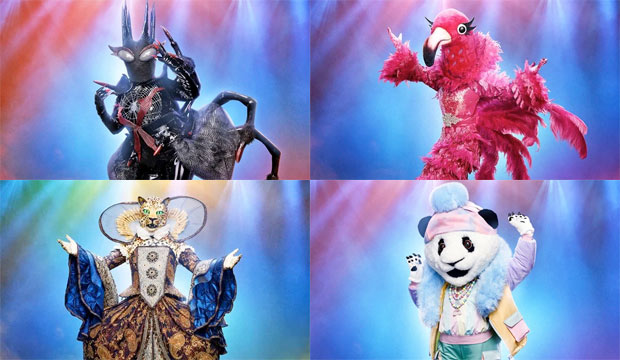 “The Masked Singer” Season 2 is still in its introductory phase, with this week’s third hour welcoming Black Widow, Flamingo, Leopard and Panda to Fox’s wild and wacky reality TV show. The four new costumed celebrities faced off in two separate match-ups, with the winner of each pairing determined by the votes of the in-studio audience and judges Nicole Scherzinger, Ken Jeong, Jenny McCarthy and Robin Thicke. The two lowest vote-getters then duked it out in the Smackdown, with one surviving to another day and the other being unmasked in front of America. So how’d it all play out?

SEEMissed opportunity? ‘The Masked Singer’ Season 2 should be airing LIVE on Fox, and here’s 4 reasons why

Below, check out our minute-by-minute “The Masked Singer” recap of Season 2, Episode 3, titled “Return of the Masks: Group C,” to find out what happened Wednesday, October 2 at 8/7c. Then be sure to sound off in the comments section about your favorite costumed celebs on Fox’s reality TV show, who impresses you the most, and who you think will ultimately win. Keep refreshing/reloading this live blog for the most recent updates.

8:00 p.m. — “Previously on ‘The Masked Singer’!” In the two-episode premiere, Group A performed first with Butterfly and Thingamajig winning their head-to-head match-ups against Egg and Skeleton, who then faced off in the Smackdown. Egg’s performance of “One Way or Another” by Blondie cracked under pressure and he unmasked to reveal figure skater Johnny Weir. Group B performed in the second hour with Rottweiler and Tree winning the initial audience votes over Ladybug and Ice Cream, respectively. In the Smackdown, Ice Cream’s rendition of “Whip It” by Devo melted by comparison and he unmasked to reveal internet celebrity Ninja.

8:02 p.m. — Tonight’s two battles are announced by host Nick Cannon. First up will be Black Widow vs. Leopard, with Flamingo vs. Panda facing off later in the evening.

8:04 p.m. — Black Widow comes out looking like a “samurai,” says Nicole. In her clues package, Black Widow welcomes us to her “empire.” There is also a photograph of a peach and crystal balls and references to being a “director” — I don’t know what to think! “I Wanna Dance With Somebody” by Whitney Houston is her song choice, and the panelists are definitely impressed with her ability to “sang,” as Jenny proclaims. Nicole thinks she recognizes Blake Widow’s voice, but I’m not getting any familiar bites. Jenny is “blown away,” saying it’s the first time she’s gotten chills all season long. Ken agrees, calling her “so strong.”

8:13 p.m. — It’s time for Leopard’s clues package. She can “survive anywhere” and has been a “heavy hitter” throughout her career. Her “celebrity aspect” is all people want to talk about now, which annoys her. While it’s hard to determine her height on screen, the panelists note that she’s “so tall.” When Leopard starts singing “Somebody to Love” by Queen, the judges realize right away that it’s a MAN … oops! The producers fooled us for sure on that one.

8:17 p.m. — Leopard’s performance was “awesome,” raves Jenny and Nicole. “Somebody major” is under the costume, notes Nicole about his “mature” voice. Robin goes through the clues and suggests Billy Porter from “Pose,” even recognizing the way he holds the microphone. Ken thinks it’s British star Robbie Williams. Jenny doesn’t like that pick, saying she thinks it’s someone more famous, aka Jamie Foxx. When Leopard speaks, it’s hard to hear what he’s saying because of the high-pitched auto-tune, but the girls pick out the word “divine.” Leopard just squeezed Nick’s butt! Somebody call HR.

8:24 p.m. — Everybody has voted for who they think is the winner of tonight’s first match-up. Nick announces the champion is … Black Widow! The spider twerks as she exits the stage. Leopard will have a chance to survive later in the show in the Smackdown.

8:26 p.m. — Here comes Flamingo! She’s “teeny weeny,” notes Jenny. Panda struts out as well, but the judges can’t tell what kind of body shape she has. Flamingo’s clues package is full of pink, pink, pink. Here’s the rundown: She’s possibly a famous YouTuber who gives makeup and/or fashion advice. She’s been trapped in her career before. She chose the Flamingo because it “represents new beginnings.”

8:28 p.m. — “Sucker” by Jones Brothers is Flamingo’s song choice. She owns the stage like a pro, but is she more of a dancer than a singer? Nicole notices Flamingo’s “voluptuous curves” and guesses someone from Fifth Harmony or Destiny’s Child. Ken names Olivia Jade as a disgraced YouTuber, then jokes he’s wrong and that it’s Chuck Schumer. Flamingo admits she’s “sassy” and wants to give an “escape” to her fans. An audience member shouts out Kandi Burruss, which Robin agrees with. Tia Mowry is Jenny’s last-minute pick. Later on backstage Flamingo hints she’s NOT a professional singer. I was right!

8:36 p.m. — Now it’s time for Panda’s clues package. Panda writes a letter to her own “papa bear,” saying she came from a “family in the forest.” She has “animal instinct” and wants to make her father “proud.” Panda’s song choice is “Stronger” by Kelly Clarkson. Before she sings a word, Robin proclaims it’s Laila Ali. Hmm, I like that guess a lot. Panda’s voice is low-pitched but definitely female. Her curviness really comes out as she shakes her bear-booty on the stage.

8:40 p.m. — Ken calls it an “amazing performance” and that she “captured the stage” as the show’s sentimental favorite. Ken’s initial guess is Martha Stewart, which gives the audience a good laugh. Nicole picks up on the clues and suggests Venus Williams. Jenny thinks it could be an MMA fighter, perhaps Ronda Rousey. “I’m lovable, but fierce,” states Panda when she’s handed the microphone. That makes Ken think of Queen Latifah, a guess that Nicole strongly disagrees with.

8:42 p.m. — The audience votes for their favorite of this second match-up and it’s … Flamingo! That means Panda now has to face off against Leopard in the Smackdown.

8:49 p.m. — It’s Smackdown time. Panda sings “All I Do Is Win” by DJ Khaled and hops around the stage sounding a bit out of breath. Leopard performs “Respect” by Aretha Franklin and has the judges’ jaws on the floor with his in-character personality. Leopard is definitely my favorite of this duo, but let’s see how the panelists vote.

8:56 p.m. — The votes are in! The winner of the Smackdown is Leopard. That means poor Panda has to say goodbye to the competition, womp womp. The judges make their final guesses: Jenny picks Wanda Sykes, Ken picks Queen Latifah, Robin picks Loni Love and Nicole picks Venus Williams. As the audience shouts “Take it off!” Nick helps Panda remove her abnormally large mask. After what feels like an eternity, Panda is revealed to be … Laila Ali!

8:59 p.m. — Laila says being in the Panda suit was “crazy.” It was “hot” in the costume but she had a “lot of fun.” As an undefeated boxer, Laila says she feels “humbled” to have actually lost something for once! Did YOU guess Laila was hiding behind the Panda mask?