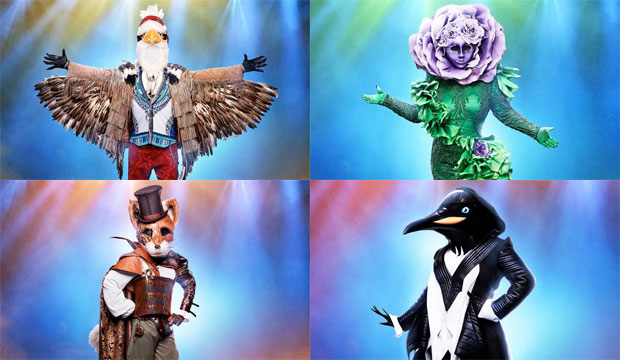 If you think you’ve already met all of “The Masked Singer” contestants for Season 2, you’re sadly mistaken. Wednesday’s fourth hour introduced America to the last group of costumed characters: Eagle, Flower, Fox and Penguin. These four singers faced off in two separate match-ups, with the winner of each pairing determined by the votes of the in-studio audience and judges Jenny McCarthy, Nicole Scherzinger, Ken Jeong and Robin Thicke. The two lowest vote-getters then duked it out in the Smackdown, with one surviving to another day and the other being unmasked in front of America. So how’d it all play out?

Below, check out our minute-by-minute “The Masked Singer” recap of Season 2, Episode 4, titled “Return of the Masks: Group D,” to find out what happened Wednesday, October 9 at 8/7c. Then be sure to sound off in the comments section about your favorite costumed celebs on Fox’s reality TV show, who impresses you the most, and who you think will ultimately win. Keep refreshing/reloading this live blog for the most recent updates.

8:00 p.m. — “Previously on ‘The Masked Singer’!” In the third episode, Group C performed with Black Widow and Flamingo winning their head-to-head match-ups against Leopard and Panda, respectively. In the Smackdown, Panda’s rendition of “All I Do Is Win” by DJ Khaled wasn’t as strong as Leopard’s cover of “Respect” by Aretha Franklin and Panda was unmasked to reveal boxer Laila Ali. “I was a ball of nerves out there, but it was so much fun,” Laila declared after the show. Who will be eliminated this week?

8:10 p.m. — The last new group of masked celebrity singers are about to face off! Up first is Flower vs. Eagle. Flower is up first and says she blossoms in whichever field she plants herself in. She’s been involved in cooking, clothing and crafts. She’s admittedly a diva who refuses to even go to the grocery store without pumps on, but she’s ready to have fun and be free. She calls herself a legend with a “Vision of Love” and also mentions “What’s Love Got to Do With It.” But don’t get your hopes up…I doubt Mariah Carey or Tina Turner are hiding under this mask! Finally she begins singing “9 to 5” by Dolly Parton and I can tell almost immediately it’s Patti LaBelle! She’s purposely holding back her vocals, but I recognize this tone anywhere. Sorry Patti, there’s no mistaking that voice! The judges throw out names like Mariah, Patti, Jennifer Hudson, Jessie J and Bjork. I don’t care what they say – this is Patti Labelle, case closed.

8:20 p.m. — It’s time for the Eagle to land! Eagle claims he’s studious and intelligent, soaring to the highest heights in his field. After a serious health scare and the loss of a parent, he’s realized life is too short to let his dreams fly by. He’s spent time listening to other peoples’ stories, but he’s ready to write his own. He doesn’t just hang out with rock stars…he is one! Eagle begins singing “I Would Do Anything For Love (But I Won’t Do That)” by Meatloaf. He’s got an okay voice, but he’s definitely not a professional singer. He also looks tall and thin. Could it be Howard Stern? Nicole is thinking Brett Michaels, Robin says Pauly Shore and Jenny chimes in with Howard Stern or Adam Carolla, while Ken thinks it’s Craig Ferguson. For his final clue, Eagle says he can see things miles away that others cannot see. Perhaps he’s a psychic or a medium?

8:25 p.m. — The results are in and Flower has won this first battle. Eagle will have to compete in the Smackdown later on to keep his mask on.

8:35 p.m. — Time for Penguin vs. Fox! Up first is Penguin, who says it strives for his voice to be heard. Penguin is a woman who says she’s been told her whole life she’s not funny enough or pretty enough. She appears to be a comedian and is singing for those who dare to be different. She doesn’t need permission from anyone and there were hints that she’s played a secretary at some point. She also says her career was over. From the clue package alone I’m picking Kathy Griffin. She’s singing “In the Middle” and she’s got a raspy voice that sounds NOTHING like Kathy Griffin so I’m wrong. Penguin is a little rough around the edges vocally, but she actually hits a few powerful, nice notes. I’m stumped on this one. Robin thinks Penguin dances like Melissa McCarthy and Nicole guessed Megan Mullally. Obviously Nicole doesn’t know Megan can sing her face off. Jenny guesses Kathy Griffin or Sherri Shepherd. For her final clue Penguin reiterates, “Everything is not always as black or white as it seems.”

8:45 p.m. — It’s time for Fox to take the stage. Fox does his best work at night and has dabbled in many different genres…from Doogie to Doubtfire. Does that mean he’s worked with Neil Patrick Harris and Robin Williams? Over the years he’s lived two different lives. He has an on-air superhero persona who loves to entertain. When he’s at home, he’s a completely different person. Under this mask, his two identities become one. Fox begins singing “This Love” and he’s got a VOICE. He moves around the stage with great theatrics and he’s vocally spot on with soul, power and range. Who is this swaggy Fox? Some names the judges throw out include Wesley Snipes, Leslie Odom Jr., Anthony Mackie and Tyrese Gibson. For his final hint, Fox says he’s quick, he refuses to be caged in and he’s crafty. That makes Ken think it’s Jamie Foxx. It’s time to vote!

8:50 p.m. — The votes are in and the winner of this face off is Fox! Penguin will take on Eagle in tonight’s smack down.

8:55 p.m. — It’s time for Penguin and Eagle to compete in a smack down for anonymity! Eagle is up first with “These Boots are Made For Walking.” Eagle has this crooner vibe but his voice sounds more natural on this song. I have no idea who this is. Jenny thinks it could be Jeff Foxworthy. Penguin is next with “I’m Worth It” and she’s getting sassy on this one and I’m starting to think Jenny could be right about Sherri Shepherd. The vote is in and it’s the winner of this smack down is…Penguin!

8:59 p.m. — Eagle is heading home, but first the panel must give their final guess before he’s unmasked. Jenny guesses Adam Corolla, Robin picks Howard Stern, Ken suggests Craig Ferguson and Nicole is betting it’s Jeff Foxworthy. But the time has come for the Eagle to unmask. The Eagle is…Dr. Drew Pinsky! Wow! I didn’t see that one coming. That’s a wrap for tonight!