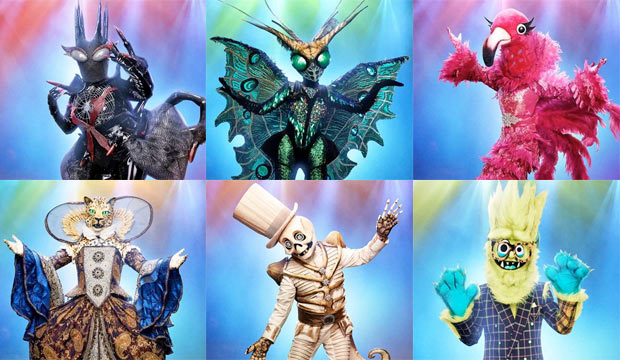 The introductory phase of “The Masked Singer” Season 2 is behind us, which means now the real competition begins. Heading into Wednesday’s episode, there were still 12 costumed celebrities in the running to win Fox’s wild and wacky reality TV series. They’ve been divided into two groups of six, with Black Widow, Butterfly, Flamingo, Leopard, Skeleton and Thingamajig up first this week. These masked singers all performed for the votes of the in-studio audience and judges Jenny McCarthy, Ken Jeong, Nicole Scherzinger and Robin Thicke, with the loser forced to reveal their true identity. So how did it all play out?

SEEIs it fair for professional singers to compete on ‘The Masked Singer’ against athletes, gamers, talk show hosts? [POLL]

Below, check out our minute-by-minute “The Masked Singer” recap of Season 2, Episode 5, titled “Once Upon a Mask,” to find out what happened Wednesday, October 16 at 8/7c. Then be sure to sound off in the comments section about your favorite costumed celebs on Fox’s reality TV show, who impresses you the most, and who you think will ultimately win. Keep refreshing/reloading this live blog for the most recent updates.

8:00 p.m. — “Previously on ‘The Masked Singer’!” In the fourth episode, Group D performed with Flower and Fox winning their head-to-head match-ups against Eagle and Penguin, respectively. Later in the Smackdown, Eagle’s rendition of “These Boots Are Made for Walkin'” wasn’t as strong as Penguin’s cover of “Worth It” and so Eagle was unmasked to reveal talk show host Dr. Drew Pinsky. “I think this experience has changed me. It challenged me, certainly,” he admitted during his exit interview. Who will be eliminated this week?

8:03 p.m. — The first round is over and now it’s time to whittle down the competition with six singers delivering their second performances of the season. Host Nick Cannon leads the judges in taking shots… of water. This is family hour after all. Tonight’s first singer is the Flamingo! In her clip package, she explains she’s gone from “hoodrat to Hollywood triple threat,” having humble beginnings with no connections, and being discovered by a “powerful wizard.” She’s performing “Footloose” by Kenny Loggins and has the judges and the crowd on their feet. Jenny is smiling so big she says it broke her botox. Nicole deduces from her clip package that Flamingo may have been discovered by Simon Cowell, guessing she may be Ally Brooke from Fifth Harmony. Jenny thinks it may be The Cheetah Girls’ Adrienne Bailon, while Robin is still stuck on Kandi Burress, as suggested last time. Flamingo gives another clue, noting when she was younger she wanted to be a doctor, attended a medical training school. Cue Dr. Ken’s ears perking up.

8:11 p.m. — It’s time for the Leopard! Already a fun fan favorite, he notes in his clip package he wasn’t always “wanted,” but has used his talent as an escape and lives his life in color. He says it’s never too late to “flip the script” and wants to be a hero. Leopard is singing “Stitches” by Shawn Mendes, with the judges taking note of his deep tone. Robin says he exudes glamor and sophistication while Ken likes how Leopard is totally in character throughout. Jamie Foxx and Billy Porter are brought up as possibilities yet again, while Jenny thinks he has the drag queen confidence of RuPaul. She might be onto something here. Robin bafflingly suggests it might be Neil Patrick Harris. Leopard says he once served fast food and the judges are stumped.

8:22 p.m. — Black Widow is next! She says in her clip she had to maintain a squeaky clean image at an early age but it didn’t fit her. She says she’s been known for two things in her career: her voice and her badonkadonk. Black Widow is switching things up with a country song, “Before He Cheats” by Carrie Underwood. The judges are visibly stunned into silence (for the most part) throughout. Jenny says she got the chills again with her performance. Robin is going with Raven-Symoné (very smart, especially after seeing that glimpse of a crystal ball in her first clip package, a possible nod to “That’s So Raven”) while Nicole is thinking Christina Aguilera. Ken is thinking Tatyana Ali from “The Fresh Prince of Bel-Air.” Black Widow says she never went to prom but she pretended to, all but confirming she’s an actress of some sort.

8:26 p.m. — It’s time for Skeleton! In his clip package, he references the three amigos, joint custody, the fact that he felt overshadowed, and how being in the background helped him be more instrumental. Sounds like an older comedian of sorts, like Martin Short or Dana Carvey. Skeleton is performing “Are you Gonna Be My Girl” by Jet, managing to both sing and grunt. Either way, he has the crowd on its feet. Ken considers Skeleton a sentimental favorite and thinks its Short, his childhood idol. and Nicole is thinking Teller from Penn and Teller. Jenny has some sort of moment of clarity and believes it’s Paul Shaffer. Skeleton says he was once inducted into the National Black Sports and Entertainment Hall of Fame. Nicole wonders if one has to be black to be inducted.

8:35 p.m. — Thingamajig is taking the stage! Singing has always been his first love, and he was told as a kid not to run with the bulls. He notes that he’s just a big softie and wants to be seen as warm and fluffy on the inside as much as the outside. He’s performing “Rainbow” by Kacey Musgraves, a delicate ballad that has all four judges emotionally affected. Nicole, in particular, is touched beyond measure. Thingamajig has the audience, and this live blogger, in tears. Nicole says he sounds like an angel and has a real gift. Jenny says the clues indicate he’s an athlete but his voice indicates he’s a proper singer. Nicole says she would marry Thingamajig. She wonders if LeBron James could sing like that. Robin thinks it could be Dwight Howard. Ken says the basketball clues could be throwing them off, positing Montell Jordan as a possibility. Thingamajig then says his darkest moment is when he went to rehab. The judges discuss whether it could be Dennis Rodman.

8:46 p.m. — Butterfly is rounding out tonight’s episode. At the height of her career, she says everyone was “saying her name.” Sounds like a non-Beyoncé member of Destiny’s Child. When she was ready for her to have her proper time, though, it didn’t quite work out. She feels like she’s being given a second chance. Butterfly is performing “Livin’ on a Prayer” by Bon Jovi. Jenny wonders if it could be Mel B, considering a London clue in the clip package. She’s pulling out some serious vocal runs at the end of this performance. She notes that during rehearsal, she got electrocuted on the stage. Um, yikes?! Jenny thinks it might be Fantasia because she’s “just feeling it.” Ken seconds Jenny’s early thought of Mel B. Nicole is putting a bunch of clues together and thinks it might be model Twiggy. Robin believes it could be Leona Lewis. Butterfly ends all this speculation quickly by stating in her very clear American voice that she got a butterfly tattoo, and the judges pick up on the fact that she’s definitely not a Brit.

8:57 p.m. — It’s the moment of truth. The audience and the panel vote for their favorite performer of the night, with the lowest vote-getter being eliminated from the competition. Nick reveals that Skeleton earned the least amount of votes and must unmask himself. Jenny and Robin agree that it is Paul Shaffer while Ken thinks it’s Martin Short and Nicole guesses Teller from Penn and Teller. Time for the unmasking! Alas, Jenny and Robin were right! The Skeleton is Paul Shaffer. He notes the judges had his number from the beginning. He serenades us with an encore performance of “Are You Gonna Be My Girl” and that wraps up the night!