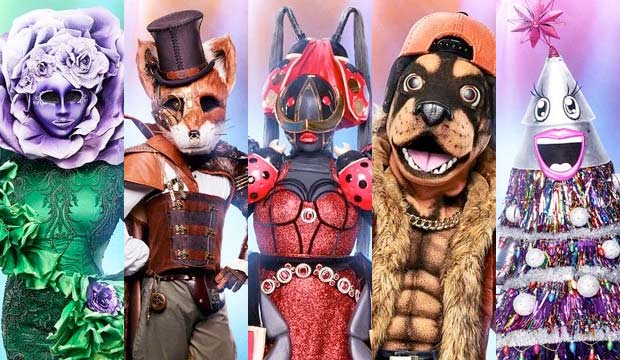 Wednesday’s episode of “The Masked Singer” welcomed back five costumed celebrities who last performed on November 6: Flower, Fox, Ladybug, Rottweiler and Tree. The four normal panelists — Ken Jeong, Jenny McCarthy, Nicole Scherzinger and Robin Thicke — were joined this week by special guest judge Triumph the Insult Comic Dog, who helped try to sniff for clues in TV’s wackiest and wildest guessing game. By the end of the hour, all five contestants had sung their hearts out, but who received the lowest number of votes and unmasked in front of America?

Below, check out our minute-by-minute “The Masked Singer” recap of Season 2, Episode 8, titled “Triumph Over Masks,” to find out what happened Wednesday, November 13 at 8/7c. Then be sure to sound off in the comments section about your favorite costumed celebs on Fox’s reality TV show, who impresses you the most, and who you think will ultimately win. Keep refreshing/reloading this live blog for the most recent updates.

SEE‘The Masked Singer’: Anthony Anderson is all about the Nicole Scherzinger-Thingamajig showmance — ‘I can marry them’

8:00 p.m. — “Previously on ‘The Masked Singer’!” In last week’s two-hour episode, all 11 singers performed on the same night for the first time. The first hour featured a battle between Flower, Fox, Ladybug, Penguin, Rottweiler and Tree, with Penguin unmasking to reveal comedian Sherri Shepherd. The second hour showcased the returns of Black Widow, Butterly, Flamingo, Leopard and Thingamajig, with Black Widow forced to reveal her true identity as actress/host Raven-Symone. Who will be the eighth costumed celeb eliminated tonight?

8:10 p.m. — Up first is the Fox who always dreams about entertaining people on tour. We see a glimpse of the “Foxhole Hotel” and Jenny mentions Jamie Foxx has a podcast called Foxhole. He mentions having a 30 year career that earned him many award, but he’s mostly known for being part of a pack of talented fellas. Fox is singing “Every Little Step” by Bobby Brown and as usual he’s pitch perfect. I still think this is Jamie Fox and the “pack of talented fellas” he mentioned could just mean all of his brothers. Fox is showing off some dance moves and really working the stage tonight. I’ll be shocked if he doesn’t make it through this round. The panel throws out guesses such as AJ McLean of the Backstreet Boys, Sterling K. Brown, Shawn Stockman of Boyz II Men and Jamie Foxx. As his revealing item, Fox shows off an old-school boombox that he says was a gift from his father and helped him find his voice.

8:20 p.m. — It’s the Ladybug’s turn to perform and she’s more empowered than ever to prove herself. For years she hasn’t believed in herself and whether it’s been her career, her relationships or her family she has let her insecurities get in her way. We see images of makeup and shoes throughout her introduction. Singing “Youngblood” by 5 Seconds of Summer, Ladybug is slowing things down this week and the panel thinks she’s throwing her voice. She definitely has more of a rock edge than we’ve heard before. That was a good performance and Ladybug certainly has experience singing. Some of the guesses as to Ladybug’s identity include Nicki Minaj, Jamie Lynn Spears, Lindsay Lohan and Paris Jackson. For her revealing item, we see an “all access” golf cart and Ladybug says that in her youth she wasn’t afraid to get a little mud on her tires.

8:30 p.m. — Flower is up next and she reveals as a young bud she could never imagine being a competitor in something like this. Being on stage was always her “dreamgirls” but she was shy about showing her talent. She is still an introvert and nothing brings her more pleasure than kicking off her shoes (okay Patti LaBelle!) and laying in “rapture” in her own secret garden. Tonight Flower is singing “Amazed” by Lonestar. Flower is so unmistakably Patti, but she continues to try to throw the panel off by singing outside her own genre. Her voice is just too unmistakable. The panel is just playing along at this point and throws out names like Bjork, Gloria Gaynor, Patti LaBelle, Jennifer Holliday and Anita Baker. Her revealing item is a deck of cards to which Flower says, “It’s not about the hand your dealt, but it’s about the way you play it.

8:40 p.m. — It’s time to see the Tree take the stage again. She says the hardest part of this competition is learning to stand on her own to feet and we see a reference to Broadway. She mentions being beamed up into another dimension and also references “strangers with candy.” Tonight Tree is singing “No Excuses” by Meghan Trainor. Tree is a strong vocalist and loves to shake her branches around the stage. She’s really belting it out tonight and I’m guessing she’s a veteran performer with some serious chops. The panel thinks Tree could be Amy Sedaris, Molly Shannon, Cheri Oteri, Lauren Graham and Rachael Ray. Tree’s revealing item is a bowl of soup to which she says, “If it wasn’t for soup I’m not sure I would be where I am at today.”

8:50 p.m. — Last up tonight is the Rottweiler. When he started the competition he never imaged he would make it this far. He says he didn’t take the conventional route to stardom and we see images of a vacuum cleaner. We also see a flag of the state of North Carolina and a crime scene that implies he’s played a detective on TV. Tonight Rottweiler is changing things up with “Castle on a Hill” by Ed Sheeran. I have no clue who this is but his voice is incredible. What a great song choice for him! The panel is blown away by him tonight and some of their guesses include Gavin DeGraw, Darren Criss and James Franco. For his revealing item, Rottweiler shows off a portrait that he painted of Triumph the Insult Comic Dog. Clearly Rottweiler can paint!

8:59 p.m. — It’s time to see which creature will be voted out and forced to unmask! The performer leaving tonight is the Ladybug. So who is the Ladybug? The panel’s final guesses are Paris Jackson, Lindsay Lohan x 3, and Jamie Lynn Spears. So let the Ladybug reveal herself! Ladybug is…Kelly Osbourne! The panel was all wrong! She threw the panel off by faking a Southern accent. Well played Kelly! That’s a wrap for tonight.