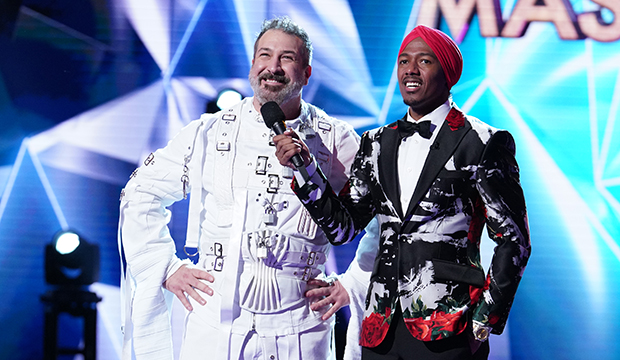 Joey Fatone just can’t quit “The Masked Singer.” After getting a tattoo of his Rabbit get-up, the ‘N Sync-er wants to literally turn the tables and sit on the panel in the second season.

“Who knows who’s gonna be on it, and I don’t want to know who’s going to be on it, because if I’m going to be a judge on it…” Fatone told “Entertainment Tonight,” winking at the camera (watch below). “Plug, plug.”

Fatone likely just wants a guest gig, not a permanent one alongside Robin Thicke, Jenny McCarthy, Ken Jeong and Nicole Scherzinger. Joel McHale, J.B. Smoove and Kenan Thompson were guest panelists last season, with Thompson present for Rabbit’s unmasking in the semifinal. Only Thicke and Scherzinger correctly guessed that Fatone was underneath that insane bunny mask.

“Hopefully that’ll be fun because now that I have an inside view on it, coming from another standpoint, it’d be kind of fun to do,” Fatone told “ET.” “We’ll see. Hopefully.”

There’s no specific celebrity on his wish list for Season 2, but Fatone would like to see “a lot more people that maybe don’t get a chance to sing” to stump viewers, similar to Rumer Willis, aka Lion. “She sang before, but not a lot of people knew her voice, and she’s got a kick-ass voice,” he said.

Chances are the show will tap a Season 1 crooner, especially champ T-Pain/Monster, to guest judge for the novelty of it all. Will having been a masked singer give them an edge? Or will they overthink it? The storyline writes itself.